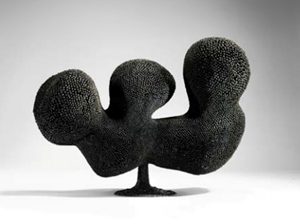 Sotheby’s is pleased to announce that the public exhibition for 16 November auction BERTOIA is now open in their New York galleries.

Sotheby’s is pleased to announce that the public exhibition for 16 November auction BERTOIA – Featuring Masterworks from the Kaare Berntsen Collection is now open in their New York galleries, alongside the upcoming auctions of Impressionist & Modern and Contemporary Art.

This landmark sale includes some of the most important works by Harry Bertoia ever to appear at auction. The gallerist Kaare Berntsen is credited with introducing Bertoia’s work to Norway through a series of groundbreaking exhibitions that began in Oslo in 1972, until Bertoia’s death in 1978. The close friendship and patronage that developed inspired Bertoia to explore the boundaries of his art, and the works that resulted represent the very pinnacle of his oeuvre. Sotheby's is delighted to offer 22 works from the Berntsen Collection, including several exceptional undulating bush forms, a number of abstract spill casts and welded forms, and a series of sounding sculptures (Sonambients) of varying sizes and configurations (pictured below).