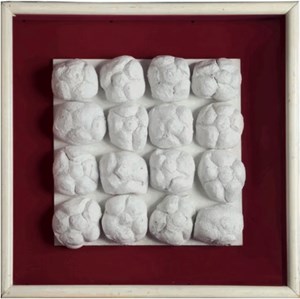 Manzoni emerged as a powerful voice for the avant garde in the 1950s, during a moment of social upheaval in Europe caused by the rapid growth of postwar industry and technology. During a brief but influential career that ended with his untimely death from a heart attack in 1963 at the age of 29, Manzoni evolved from a self-taught abstract painter into a change agent and engineer of new ideas about artistic practice. Together with Enrico Castellani he founded Azimut gallery and ‘Azimuth’ magazine (1959 – 1960), intended to forge an international dialogue and unite artistic movements across Italy and the rest of Europe. Among those published in ‘Azimuth’ magazine were Samuel Beckett, Gillo Dorfles, Yves Klein, Francis Picabia, Kurt Schwitters, Robert Rauschenberg, and Jean Tinguely.

Manzoni initiated his radical Achromes (literally translated as ‘without colour’ or ‘neutral’) series initially with gesso and then with kaolin and creased canvases in 1957 / 1958, marking the beginning of a varied and sustained investigation into aesthetic questions that would last until his death. The early Achromes were influenced in part by the experiments of Lucio Fontana and Alberto Burri. But Manzoni pushed their hypotheses further, embarking upon works that used an entirely new visual language and reframed artistic interpretation. His tireless quest to understand the artist’s role in the art making process prompted conceptual leaps and experiments in early performance art.

Hauser & Wirth will exhibit an iconic work from Manzoni’s Achromes series in their booth at the Art Basel fair, 15 – 18 June 2017. A major survey exhibition of the artist’s work will take place in late 2018 at the gallery’s 22nd Street New York City location. The gallery will also support the Fondazione in preparing a new catalogue raisonné of the artist’s work, expected to be published online in the next two years.