How to Get the Attention of Your Museum 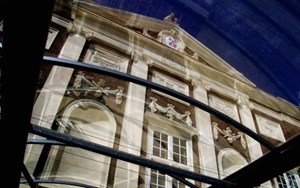 In an article in the dutch newspaper Leidsch Dagblad, Christiaan Vogelaar - curator of aged master paintings - told the Museum De Lakenhal in Leiden had discovered a painting by Rembrandt van Rijn.

In an article in the dutch newspaper Leidsch Dagblad, Christiaan Vogelaar - curator of aged master paintings - told the Museum De Lakenhal in Leiden had discovered a painting by Rembrandt van Rijn.  Mister Vogelaar was exited for his museum to have the privilege of exhibiting this work as the first in the world commencing on November 7, to be shown as part of the exhibition, The Young Rembrandt.
A press release by the Museum De Lakenhal stated that the news was unfortunately premature. The Museum could not give any statements at this point, due to ongoing research. Rembrandt had created a series of 5 paintings known as The Senses, and confirmation of the much desired discovery of the missing painting was not yet absolute.
Image on top: source
By Dirk Vanduffel
Dirk defines the overall policy of ArtDependence Magazine, in addition to conducting interviews. He specializes in valuation and auctioning.