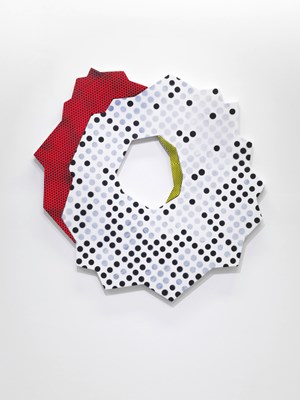 From the 21st of April until the 14th of May, Galerie Triple V is hosting it's first solo exhibition in their new space on 5 Rue Du Mail, showcasing the work of American Artist John Tremblay, who lives in Brooklyn, New York and makes abstract art. Playing with forms, agglomerations of shapes, colors and optical perceptions in his earlier works John is now applying an assortment of materials, such as found metal, to a much cleaner minimalistic effect.

From the 21st of April until the 14th of May, Galerie Triple V is hosting it's first solo exhibition in their new space on 5 Rue Du Mail, showcasing the work of American Artist John Tremblay, who lives in Brooklyn, New York and makes abstract art. Playing with forms, agglomerations of shapes, colors and optical perceptions in his earlier works John is now applying an assortment of materials, such as found metal, to a much cleaner minimalistic effect.
John kindly took us on a tour of the show and shared details with Artdependence Magazine about his techniques and the intentions of the new works presented here.
Artdependence Magazine: How do you find Triple V Gallery's new space here in Paris?
John Tremblay: Actually it is a beautiful space. It's large but it has nice character. It's a warm space though its big_ in Paris you don't really have spaces like this. It takes a lot of work to fill this space. When you hang an art-work in such a clean white space you can really seeit. Having a show at a gallery is a good chance to finally see your own work. 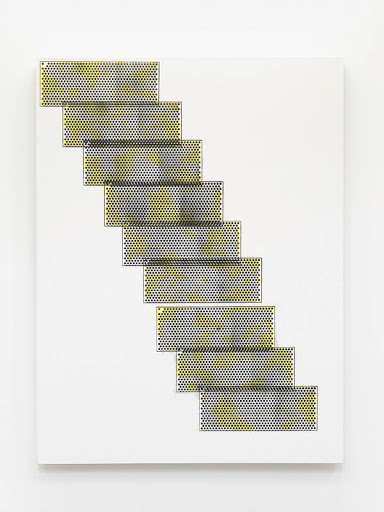 AD:  So, the show contains your latest works all of which have been created this year.
JT: Yes, all in the last year 2015 or this year 2016. All except  "Electronik Baukasten" is from 2010 earlier time but fit in the show pretty well. There are also three early works in the office and hallway. "Friendz Experiment" 2014 -2016 was built in France at " Non-Objective Sud " residency and shown there but it appears her with its new proper aluminum bracket.
AD: Tell us a bit about the other works in the show...
JT: To begin with the shaped work, "Inside Out, 2016" is actually three canvases, each canvas is a different color, they fit together like a puzzle... it's a triptych. It's along leap away from all the rectangular paintings in the world.
The work titled "Many Moons Ago" is actually a Homage to John Armleder, That's why it looks different from the rest of the things here. It fits with everything, though, he might have something to say about it. Across from that piece is the work "Electronik Baukasten"  I was looking around my studio-storage and I realized this work had never been shown before. So its here now. The newest work in the show is "F100", it was completed here. I brought the piece of aluminum from New York but had the  canvases made here. Each canvas is a different gray (or grey) paint also found in Paris. Xavier Veilhan was kind  of enough to loan me his studio and give me that spare paint.
Then we have this piece titled "Language Inside Language"  There is metal between two canvases again this time it is a found , kind of squished scrap of metal from the street. This works is part of an ongoing series which deploys a found crushed strip of metal. Sometimes its found and not flat enough so I leave it to be run over by trucks in Brooklyn, to ensure its flatness, but it is otherwise as found.  As you see the metal fits inside the two canvases. The canvases are cut to fit around the irregular shapes of the crunched metal. The canvas and the metal share the same surface since the metal is  'nestled' in between the two canvases. The cast off scrap of metal has a sense of being cared about - considerable work goes into accommodating the chaotic edge of the metal to the canvas. It's loved. Instead of ending on the trash heap, it is now being celebrated in an art work. It has a new life now. The narrative has changed. This technique I employ is an echo of Kintsugi, the Japanese method of repairing broken pottery: when someone breaks a beautiful ceramic pot, it is skillfully put it back together using glue dusted or mixed with gold. This fact came to me later, but it fits pretty well into my concept. Something is destroyed then it comes back more beautiful than ever. You clearly see the flaws but the flaws become the greatest thing about it.  I am coming back to this realm, so it matches my biography pretty well. 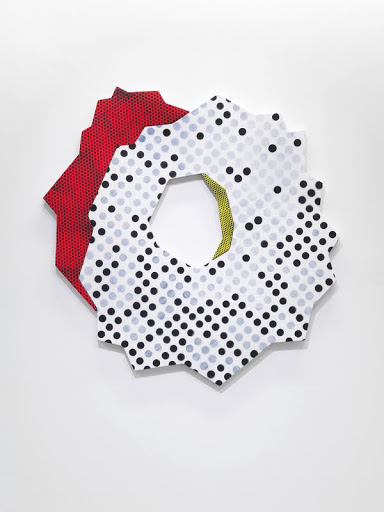 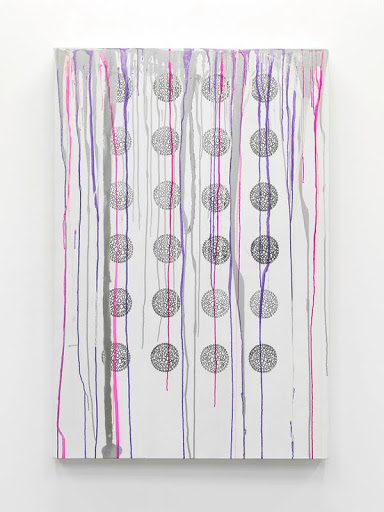 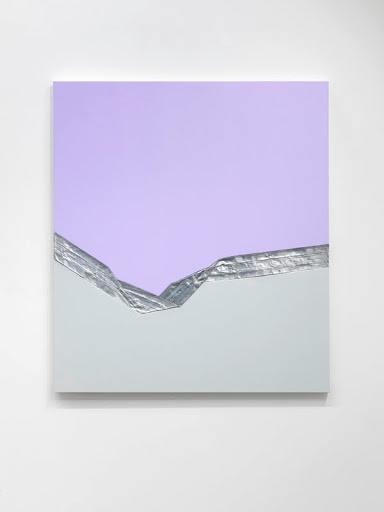 AD: How would you define the style you are working in?
JT:  The answer to this might be one for the historians, critics...  I am still alive and I am changing all the time. I saw a "New-Yorker-Magazine-style" cartoon recently: Two guys are sitting in the studio one guy is painting, the other guy, a visitor is looking on. The guy painting says: " I don't have a style, 'cause I am not f***ing boring "
Of course I have been influenced and incorporated some styles into the work. You can see all different techniques in the show. like silkscreen, sculptural pieces paintings that hang, works that lean, spray painted stencil's ...a variety of materials.
AD: Does the audience in Europe differ from the one in USA?
JT: Yes for sure absolutely! When one leaves their native country they become somehow more exotic. It can be an advantage to be from somewhere else. The French are willing to look at the work and acknowledge  it in their own way. I have noticed my work is better understood by the audience in Europe. The Europeans are quick to get the references and they like the references, we like the same things, so it works well here I guess. 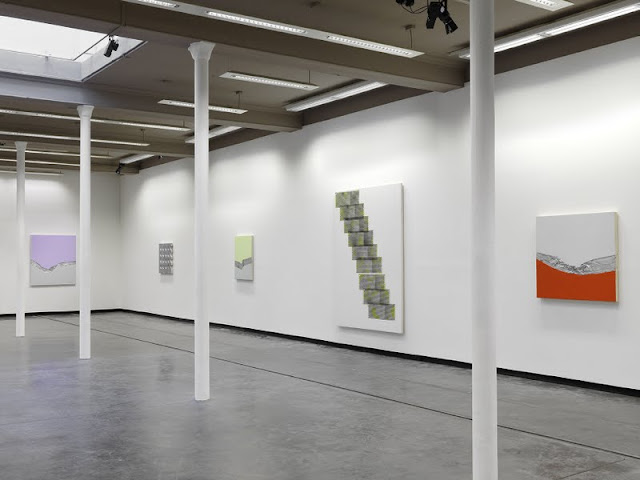 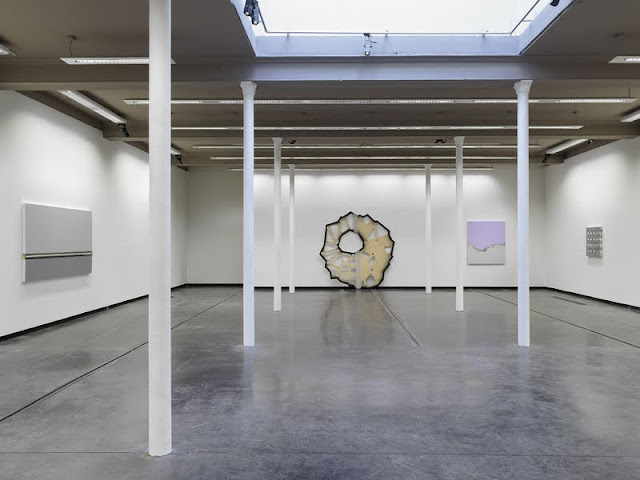 Installation view of "John Tremblay" exhibition at Galerie Triple V © André Morin
AD: What are your future plans?
JT: Just keep working! I am in a group show th
By Anna Savitskaya
Anna is a graduate of Moscow’s Photo Academy, with a previous background in intellectual property rights. In 2012 she founded the company Perspectiva Art, dealing in art consultancy, curatorship, and the coordination of exhibitions. During the bilateral year between Russia and The Netherlands in 2013, Perspectiva Art organized a tour for a Dutch artist across Russia, as well as putting together several exhibitions in the Netherlands, curated by Anna. Since October 2014, Anna has taken an active role in the development and management of ArtDependence Magazine. Anna interviews curators and artists, in addition to reviewing books and events, and collaborating with museums and art fairs.