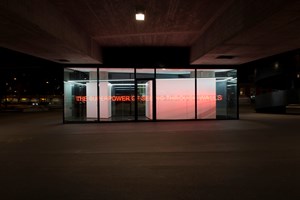 What is your favourite medium? Tim Etchells: "Language - spoken/written, as drawing and as sculpture. Or performance. Or the combination of the two."

When did you decide to become an artist?

I’m not sure it was a decision. More a matter of inevitable / gravity / luck / drift. I was always tangled up with words somehow - reading, writing. So perhaps there was an inevitability in my ending up here, working so much with language.

What is your favourite medium?

Language - spoken/written, as drawing and as sculpture. Or performance. Or the combination of the two.

What do you need to have in your studio or working space to work the way you need?

I can (and do) work anywhere! So the laptop and a physical notebook are the only things I really need... my partner Vlatka Horvat (who’s an artist) or another close friend or collaborator, if I am looking to problem solve on a project. That’s often something I want to do in conversation. Sometimes, to manifest certain kinds of works of course, I need more particular kinds of space or materials, but the core of what I do is often done on the move, regardless of location.

What are your current interests in relation to your artistic practice?

I seem to have been working a lot more with sound lately - the improvised text performances I’ve been doing, the collaboration with violinist Aisha Orazbayeva, as well as a series of works made recently for multiple speakers, particularly for the solo shows at Kunstverein Braunschweig and VITRINE Basel. In one sense I think I’m interested in this area because it’s a kind of bridge between my art practice and my work in performance. I also tend to think of these audio works with language as creating something like sculptures, in which texts gain a kind of almost-tangible presence through repetition in speech.

I’m interested in ways of connecting with viewers/listeners... in works that create the possibility for an intimacy or a subversive kind of contact.

What do you dislike about the art world?

I try not to think much about it to be honest. I’m busy with my work, with trying to use it  - to speak to people, to change them, to change myself, to ask question. In a funny sort of way I’m not sure I even feel connected to an “art world”, more to artists perhaps, and to the questions I’m pursuing.

What living artist do you admire?

Too many to say! I own a very small computer drawing by Vera Molnar. I love her work and that early wave of people working with computers and art. I like Namuan also of course - the investigation he has done into language is really something. Alastair McLennan is important to me too - I saw some of his durational work when I was much younger and it really changed things for me.

Tell us about your most recent work/ exhibition?

The most recent is the solo show ‘Open Mind’ at Vitrine in Basel. It’s a great space, with quite particular properties - a glass and steel structure, which is see-through on all sides, with architectural elements inside the box. It was really interesting to approach this space in planning the show and one of my first thoughts was to try to come at it, not via the internal walls, but instead by treating it as a single volume, a container. So the main two works, a new neon sign, and a new audio piece, both respond to the environment in this way. The neon is a single long phrase - titled ‘Seeing Through Walls’ - for which the full text reads ‘The Superpower of Seeing Through Walls’. The piece is made to fill almost the full length of the gallery, and is installed as a floating sculptural gesture, with the text suspended on an oak frame, directly addressed to the windows. There’s something of a ‘ship in a bottle’ feeling about it since the work bisects the usable space of the gallery, even blocking the doorway, and it appears, at first, to have been made in a single unbroken line. I was drawn to this gesture, which at some level ignores or performs in contradiction of the space - it’s a line, it speaks to the outside of the building whilst making the inside rather tricky to use! Of course I was also thinking about the way that you can see through the glass walls at VITRINE, and that your view of the work is interrupted by the steel structures that support the windows and the doorway - so the sign describes itself, the condition you find it in, and at the same time is contradicted. It’s playful and very simple in a way, a very direct response to the site - but there’s a lot going on once you start to unpack it.

The other work in the Vitrine Basel show is an audio work called ‘Open Mind’. It’s an 11 minute loop of a text improvisation I recorded, that works and reworks the phrase ‘we do what we can’. In a series of different textual variations and versions – ‘what can we do? do we do what we can?’ – I develop a unravelling, contradictory monologue around exterior of the gallery. To deliver the work we use a set of Feonics speakers which are attached to the inside of the glass walls - these make the glass resonate and transmit sound to the outside of the building - it’s as though the gallery itself might be thinking through these existential and political questions.

Again in this piece I take a similar approach as with the neon - the work disregards the spatial division of the gallery, speaking through the walls, from inside to outside, and the voice is positioned (‘impossibly’) around the perimeter - a voice that is ‘everywhere’, that seems to come from nowhere, that is inside and outside at the same time.

The work for VITRINE Basel picks up on my approach to another recent installation- a piece called ‘TOGETHER APART’, currently exhibited at Kunstverein Braunschweig, Germany. That work was developed very much with the idea of exploring the whole building as a site, and I made it as a 12 channel sound piece that flows through and animates the entire building.

What was a key moment in your career?

I think moving to Sheffield - to the North of England, away from the capital, into that particular post-industrial landscape, into the heart of the confrontation with Thatcherism was the most influential moment. That decision set the scene for so much.

What fascinates you so in language?

I work a lot with text in many different forms - in performance, in fiction and in visual art. One of the things which fascinates me is how good language is at creating images and ideas - the way that language creates situations, or throws us into stories, or into questions. Just a few words is enough to start something and somehow the more *incomplete* the text is, the more it sets our minds to work trying to complete it, imagining. So I guess you could say that I'm interested to explore the ways that we interact with language, and the ways that language has an effect on us.

I keep a notebook that I draw on in all aspects of my work - from neon and LED signs, to drawings, to short fiction, to essays about performance and so on. Sometimes a sign project begins with a trip to a location, or a look at images of a particular site… and other times it begins with a trawl through my notebook. The notebook is a kind of archive of bits of language - anything from a single word to a page long chunk - that I have found fascinating or intriguing for whatever reason.

Sometimes the neon and LED works I make are created specifically with a particular place in mind. In these cases I’m thinking about context - the current use or history of a particular site, the specific opportunities that might be afforded by the location and the architecture. I’m keen in these cases to find something that’s tailored very specifically to the place - bringing out ideas and speaking into the context to do something that’s relevant and dynamic in relation to the space, or the kinds of stories or questions that might already be in circulation there. Other works are made without a place in mind but each time they are installed I’m aware of their relation to context. I create all the pieces with a certain kind of open-endedness, a porousness or incompletion which means that they are ready to take on meanings and questions in dialogue with things around them. Wherever the works are placed they animate different ideas that are already present in the location - to install something on top of a grand official building, or to place something in the middle of a piece of waste ground brings out something different in the texts that I make.

For me the comical and the serious belong together - they’re not opposites, they’re deeply intertwined. There’s a playfulness in the work - playfulness of ideas, and in relation to language. What I do often celebrates the contradictory or slippery aspects of language. But even if the basis of the work is comical I’m always chasing after more serious stuff.

What are your upcoming plans?

I’m working on a big installation project for Holland in 2018, and more immediately on plans as part for a radio project in Documenta this year. I’m also working with Tate Modern/Tate Exchange to re-present a durational performance work of mine called ‘Three Tables’, in June. That’s a really interesting piece I think, very dependent on public interaction, which is somehow a first for me. And meanwhile I am also presenting performances around Europe with the group Forced Entertainment, which I’ve been leading since it began in 1984.

More information about Tim Etchells you can find here.