In the Line of Fire: Museums and Art Institutions in California Survive Thomas Fire 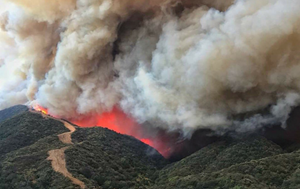 California is currently experiencing one of the largest wildfires in its history.

California is currently experiencing one of the largest wildfires in its history. The blaze has devastated large areas of Southern California and is expected to continue burning into the New Year. It has already impacted 270,000 acres of land (an area larger than New York city) and is just days away from being classified as the biggest fire in Californian history.

More than 100,000 local residents have been effected, with many having to evacuate their homes. More than 1,000 buildings have been destroyed. 8,500 fire fighters are currently battling the blaze and have managed to contain around 50% of the fire.

Over the weekend of December 16-17, a new evacuation order was issued across Santa Barbara County, raising fears for local art institutions in the area. We reached out to representatives from the Santa Barbara Museum of Art and Los Angeles based Getty Centre to learn more about the impact of the blaze.

“The museum is situated in downtown Santa Barbara so is not in direct danger,” said Katrina Carl of the Santa Barbara Museum of Art. “We have been closed to the public for the last few days, mainly due to lingering air quality issues. We do hope to open back up early next week as air quality is supposed to improve.”

In the meantime, Carol offered reassurance about the museum’s collection and contents: “The collection is very safe within our building. Our fire fighters did a superb job, especially during the height of the impact.”

The Getty Centre was also temporarily closed to the public as the fire raged in Los Angeles county. “The Skirball fire, which came closest to the building, was on the east side of the 405 freeway and never directly threatened the Getty,” said representative Ron Hartwig. “We reopened to the public on Friday, December 8th, immediately after the fire had moved further east. The Getty Villa also reopened on the same day.”

Hartwig also offered reassurance about the safety of the institution. “The Getty Centre is a type 1 fire resistant building. The building and the grounds around the Getty were designed to resist fire. The safest place for our collections in the event of a fire is exactly where they are.”

“Fortunately, there are no consequences for the Getty as a result of this fire,” Hartwig continued. “We are concerned for our neighbours across the freeway who bore the brunt of this tragic fire.”