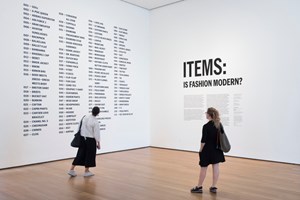 Items: Is Fashion Modern? echoes the question architect and curator Bernard Rudofsky asked in his 1944 MoMA exhibition Are Clothes Modern?. In his exploration, Rudofsky surveyed individual and collective viewpoints on mid-century clothing. For the Items exhibition, Rudofsky’s question provides a catalyst for asking the question again in the present day. Expectedly, the answer is complex in both its past and present editions.

Items: Is Fashion Modern? echoes the question architect and curator Bernard Rudofsky asked in his 1944 MoMA exhibition Are Clothes Modern?.  In his exploration, Rudofsky surveyed individual and collective viewpoints on mid-century clothing.  For the Items exhibition, Rudofsky’s question provides a catalyst for asking the question again in the present day.  Expectedly, the answer is complex in both its past and present editions.  Items showcases 111 clothing and accessories objects that have profoundly affected fashion and culture over the last century.  The exhibition further considers how these items have impacted our past and present worldviews.  Among the pieces shown, there is a strong current of mutual influence between fashion and the larger social context.  Many of the pieces featured are from fashion designers or movements spurred in response to the global fashion industry or greater social factors.  The exhibition appraises not only the items themselves, but also the relationships between fashion, functionality, culture, aesthetics, economy and technology.

“A powerful form of creative and personal expression that can be approached from multiple angles of study, fashion is unquestionably also a form of design, with its pitch struck in negotiations between form and function, means and goals, automated technologies and craftsmanship, standardization and customization, universality and self-expression,” said Items exhibition Senior Curator Paola Antonelli.  “Like all physical and digital forms of design, it moves today on a spectrum ranging from post-industrial seriality (from prêt-à-porter to fast fashion) to precious, handcrafted uniqueness (couture). As design, it exists in the service of others. In most cases, it is designed by a human being to dress others—sometimes many, many others—so that they can function in the world, in different arenas.”

The Items installation responds to the question of fashion's modernity through conceptually-grouped galleries.  The first space focuses on the changing concept of the body and silhouette, examining issues of size, image and gender.  Silhouettes are affected by trends, perceptions of what looks and feels good, and personal aesthetic choices.  The Little Black Dress is a garment whose adaptations have shape-shifted through the eras, from full-skirted and coquettish to sleek and refined to conscious of the body's form and its suggestions, illustrating the open-ended nature of constancy and change in fashion.  First shown in 1926 in a Chanel sketch for Vogue, the LBD references the historical, aristocratic use of black to convey access and privilege, as well as the virtue and respectability of its religious forms.   Clothing also provides the wearer a bridge between identities.  Yves Saint Laurent’s Le Smoking tuxedo jacket made that passage, crossing from menswear into women's formal wear in the mid-1960s.  Le Smoking was considered a radical fashion concept for its time before becoming a designer signature piece and in the end, a wardrobe staple for many among the fashionable set.  Clothing provides us an opportunity to pursue collective formal ideals and individual, less conventional approaches.

Items then moves into an area for new technologies and designers' notions of the future.  Since the 1980s, Japanese designers like Rei Kawakubo, Issey Miyake, and Yohji Yamamoto challenged the notion of a static body ideal with deconstructed and “re-formed” silhouettes. Issey Miyake’s A-POC Queen is a textile produced from a single thread and computer-programmed, industrial sewing equipment, an exaggerated extension of technological advancements from the Industrial Revolution.  A-POC is both "A Piece of Cloth" and word play on "epoch," implying a new era of fashion and innovation.  The space exploration period of the 1950's and 1960's influenced notable fashion trends such as Moon Boots and Pierre Cardin’s geometric, unisex Cosmos Collection.  From plastic, collectible Swatches to designer down jackets, modern clothes directly reflect the influence of new technologies and recombinations of forms and materials.

Items also considers the relationships between emancipation, modesty, introversion and rebellion.  The cool weather fashion essential, the turtleneck combines a reserved neckline with a lack of traditional collar.  It is versatile and popular with a range of social groups, from academics to beatniks and artists to tech entrepreneurs.  The turtleneck simultaneously nods to both modesty and rebellion, showing how clothing can free us from convention and precedent.  The kilt is another garment with a rich and varied history.  Banned as a sign of Scottish Highland rebellion in the mid-eighteenth century, the kilt was later reshaped as a symbol of Scottish identity.  In the 1970's, the kilt enjoyed another renaissance through designer Vivienne Westwood and the punk, anti-fashion movement.  This clothing era also emphasized leatherwear, which stemmed from the frontiersmen and cowboys of the American West to become de rigueur for global rock stars, artists and fashion aficionados alike.  The history of these fashion items illustrates how the meaning of what we wear is largely dependent on context and intent.

Next Items explores how clothing and accessories explicitly or implicitly deliver a message.  Fine, skilled craftsmanship and material culture define both broader esteem and value.  The monetary and symbolic worth of these items is determined by the effort they demand and their rarity.  From precious natural pearls and graded diamond engagement rings to coveted "It" handbags and of-the-moment designer shoes, symbolic status is critical.  It is often what the items represent, and association with that status and affluence, that determines their value far more than the objects themselves.  Items also considers how historically important items are appropriated in new and redirected ways.  Diamond stud earrings have long held a quiet, clear association with prosperity.  Since the 1990's, male sports figures and musicians have popularized exaggerated studs in the form of supersized "bling," denoting supersized, conscious affluence.  Other symbols of wealth that were formerly subdued have been appropriated and repurposed by celebrity and mass culture, such as emblematic designer brands Louis Vuitton, Cartier and Rolex.  This material shift reflects an ideological change in modern culture: for many, the notion of privilege has moved from the subtly suggested to the conspicuously intended.

The following section of the exhibition looks at the ways fashion and athletic culture have been combined over the past century.  The highlights include sports jerseys, which have been replicated from those of sports stars into streetwear since the 1970's.  Other active classics, such as Converse All Stars and Nike Air Force 1's, have crossed from their athletic roots into sports fashion for varied cultural groups, demonstrating the broad appeal of comfortable, fashionable footwear.  Yohji Yamamoto’s desire to merge style and athletics produced his Y-3 line in a collaboration with Adidas in the early 2000's.  Y-3 set off the vastly popular athleisure trend, elevating sportswear chic into the gym and well beyond for consumers of these highly stylized, beautifully designed pieces.  In modern history, sports items that were once valued for performance, have become equally or more revered for their stylish appearance. 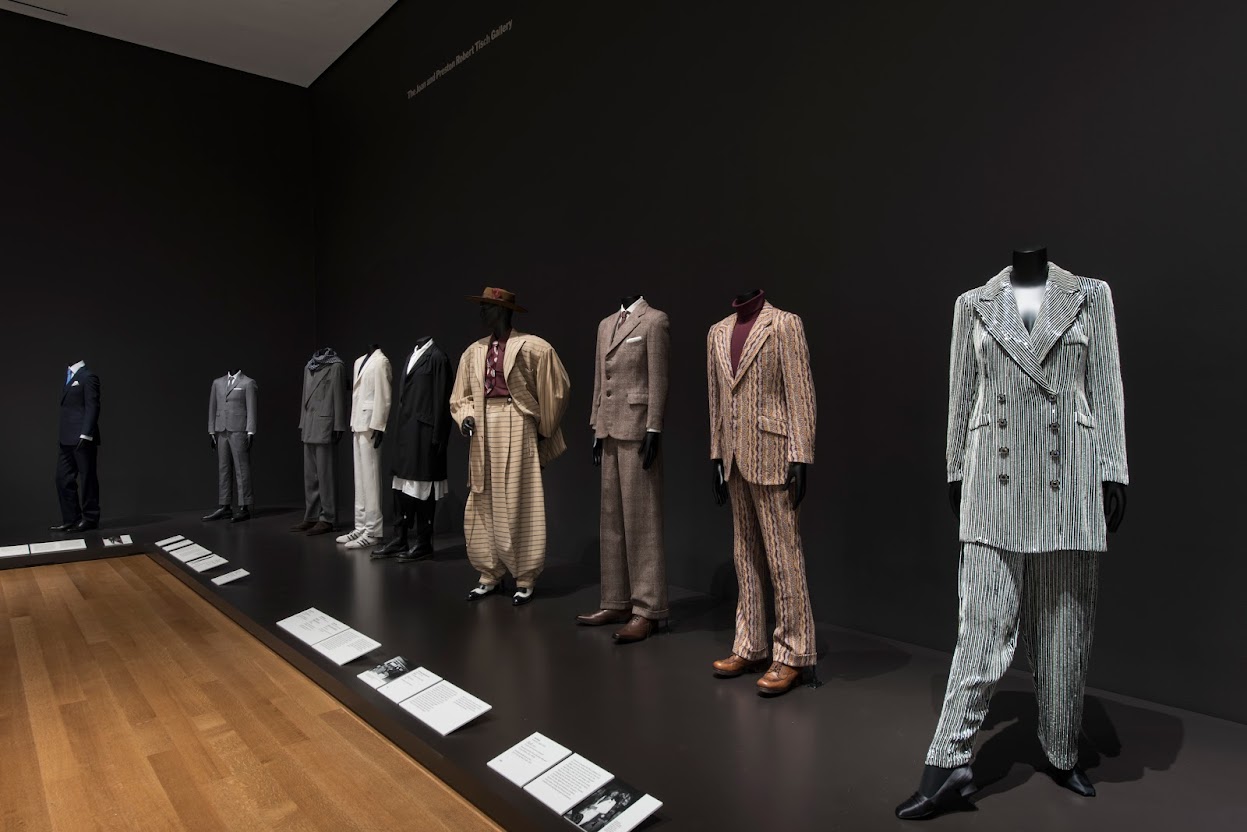 From there, Items approaches our everyday clothing "uniforms."  A uniform may be a standardized item or typical ensemble for a given situation, as well as a clothing default.  In example, the Breton shirt, once the attire of sailors and fishermen, was transformed into the world of seasides and leisure by companies like Saint James.  Also worn by style icons Pablo Picasso and Coco Chanel, this nautical item has remained a fashion constant for artists, intellectuals and designers over the eras.  Similarly, plaid flannel shirts have seen their own evolution from the sphere of workwear and outdoorsmen in the prior century to become common leisure wear of the 1950's and later, a staple of grunge rock musicians and their fans in the 1990's.  Perhaps the most universal of all the uniform items are classic Levi’s 501 jeans.  First created in the late 1800's by Levi Strauss, the cult of denim has reigned on through its diversity of proponents: cowboys of the 1930's; hippies of the 1950's and '60's; status seekers of the 1970's and '80's, and the urban chic of the 1990's.  Denim and the other uniform tenants have retained their iconic status through the diversity of their appeal over the past century.

Finally, the exhibition concludes with the relationship between power and dress. The suit is a prime example of how these ideas have evolved in the modern era. Suits once typified the sophistication and stature of professional dress and private clubs.  These associations shifted with the advent of the whimsical zoot suit of the 1930's and female suiting after the 1950's as women became increasingly present in the workforce.  From its early European and Saville Row origins to Giorgio Armani's draping versions of the 1970's and Japanese designers' deconstruction of the 1980's, the suit has been a true chameleon of forms.  In the mid '80's, Donna Karan’s Seven Easy Pieces offered a feminine but authoritative alternative to suits for professional women's' dress.  In recent years, clothing that defines professional power has seen further changes.  Today's Silicon Valley CEOs are more likely to don hoodies and denim than formal suits, suggesting apathy to established codes of dress.  These recent trends openly mirror the business industry's shift towards a more plural workforce and innovative startup companies as economic and professional mainstays in our culture.

At the close of the exhibition is a flow chart from information designer Giorgia Lupi, examining hidden connections and patterns within the 111 items and how the viewer functions within the systems of fashion.  Throughout Items, we see that it is the role of that viewer, both the individual and the larger social collective, that defines what is fashion and ultimately, what is modern.  The actions and reactions of designers and trends are in response to the culture we create, economic changes we drive and technological development we pioneer.  Fashion is modern because it addresses our temporal outlook, concerns and needs in the modern moment.  As time marches forward and our culture shifts with it, fashion is ever ready to evolve and reinvent itself right along with us.