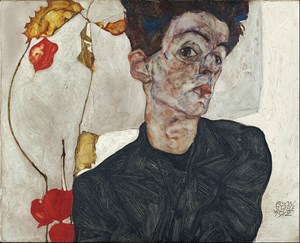 ❖ Jean-Michel Basquiat (1960-1988), one of the most significant painters of the 20th century, will be presented by Fondation Louis Vuitton across the four floors of Frank Gehry’s building. Covering the period of 1980 to 1988, this exhibition examines the painter’s entire career, focusing on around 100 of his finest works.  Just like the Heads series of 1981-82 or the display of several collaborations between Basquiat and Warhol, the exhibition includes ensembles previously unseen in Europe, works that are now unmissable such as Obnoxious Liberals (1982, Broad Art Foundation), In Italian (1983, Brant Foundation) orRiding with Death (1988, private collection) and paintings rarely seen since their first showing during the artist’s lifetime, such as Offensive Orange (1982) and Untitled (Yellow Tar and Feathers) (1982, private collections).

❖ Egon Schiele. A major exhibition of the Austrian painter (1890-1918) composed of around 80 drawings, watercolours and paintings will be shown at the same time. Schiele’s very singular vision, inseparable from the Viennese context of the early twentieth century, in just a few years became one of the heights of expressionism. This solo show, which includes first-class works such as Self-Portrait with Chinese Lantern Plant (1912) borrowed from the Leopold Museum (Vienna), Pregnant woman and Death (1911) from the Národní Galerie (Prague), or Portrait of the Artist’s Wife Seated (Edith Schiele), Holding Her Right Leg(1917) from the Morgan Library & Museum (New York), is a first in Paris for 25 years.

Although distinct from one another, the two exhibitions allow the simultaneous contemplation of two sensational bodies of work. The existential nature of Schiele’s lines, like Basquiat’s, is one of the main themes raised by Dieter Buchhart, curator of the two exhibitions.

With these two exhibitions, Fondation Louis Vuitton is once again demonstrating its determination to contextualise its presentation of contemporary creation with historical references.