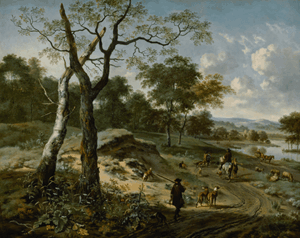 A splendid large-scale landscape is a masterwork by Jan Wijnants in collaboration with Adriaen van de Velde.

This splendid large-scale landscape is a masterwork by Jan Wijnants, one of the most important Dutch landscape painters of the second half of the 17th century. Throughout his career, Wijnants drew inspiration for his landscapes from the dunes near Haarlem, where he was born, and where his early development was influenced by Jacob van Ruisdael and Philips Wouwermans. This painting employs one of the artist’s favorite compositional structures, with the left side of the canvas built up with dunes and trees, and a winding path leading into an open panoramic view at right. The staffage in Wijnants' paintings was often added by another artist, in this case by his frequent collaborator Adriaen van de Velde. The son and brother of the marine painters, Willems van de Velde I and II, Adriaen showed promise as a landscape painter and, according to Arnold Houbraken, was sent to Haarlem to study with Wijnants. Due to his additional skill at painting both figures and animals, he was often employed to add staffage to landscapes not just by Wijnants, but by other fellow artists such as Ruisdael, Hobbema, van der Heyden and de Moucheron.

Jan Wijnants, Adriaen van de Velde, Wooded evening landscape with a hunter and his dogs, another hunter on horseback conversing with a peasant, a fishermen and a falconer carrying a hoop of falcons on a path, a wagon and other figures by a lake beyond, on Sotheby's Master Paintings Evening Sale, 01 February 2018, New Your. Estimate: 2,000,000 — 3,000,000 USD.
More information is here.