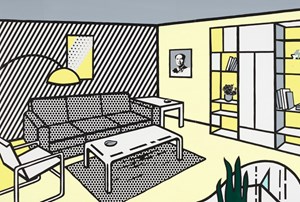 Modern Room (Study) forms an important part of one of Roy Lichtenstein’s most significant bodies of work: the Interiors. The series represents a culmination of the artist’s highly distinctive method of appropriating images from popular media in order to contemplate and critique contemporary culture. Seductive commercial images of the modern home interior acted as a major source of inspiration for the works, as Lichtenstein focused on a subject that has long captured the fascination of Pop artists: the myth of blissful bourgeois domesticity. 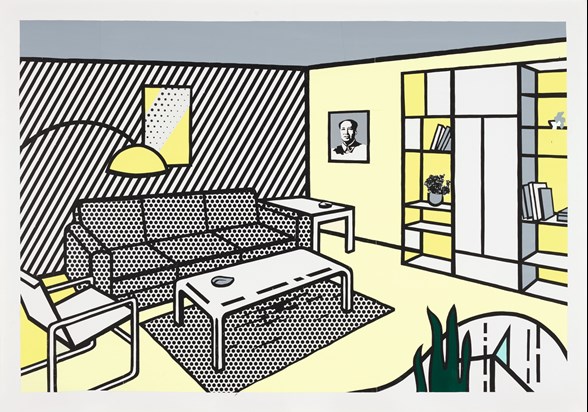 From his earliest Pop works, interiors played a vital role. His first interior painting Bathroom, from 1961, belongs to his black and white period: derived primarily from newspaper advertisements, these monochromatic works encapsulated a dramatic period of change in American painting, at a time when Lichtenstein and his fellow artists were embarking on a radical process of exploring new methods, new subjects, and new boundaries in art. Compared to Lichtenstein’s early Bathroom painting, Modern Room (Study) and other examples from the later Interiors are vibrantly coloured with punchy palettes, and imbued with an updated compositional complexity and technique.

By the time the artist returned to the theme in the 1990s, his effervescent Pop dialectic had attained legendary heights, so that the mature Interiors serve as highly developed recapitulations of his earlier aesthetic investigations. With comparable works housed in the collections of major museums such as the Solomon R. Guggenheim Museum and the Museum of Modern Art in New York, the present work stands as a consummate example from Lichtenstein’s great late series.

There is perhaps an element of irony inherent within the title of Modern Room (Study), for whilst the work was created in the 1990s, the interior harks back to the hallmarks of a fashionable 1980s design scheme in its sleek simplicity and geometrically inclined furniture. As author Robert Fitzpatrick notes, “His interior works… bristle with irony and humour. As the first large body of work that Lichtenstein started in the 1990s, the interiors caricatured the excessive 1980s documented in colourful spreads of art-filled interiors in magazines like Architectural Digest” (Robert Fitzpatrick in: Exh. Cat., Chicago, Museum of Contemporary Art, Roy Lichtenstein: Interiors, 1999, p. 13). Indeed, fascinated throughout his career by the whims and fancies of bourgeois fashion, his anachronistic mature works poignantly allude to the fast-changing nature of aesthetic taste as much as the ever-increasing power of a consumer-driven economy.

The artist often included replicas of his or his contemporaries’ paintings within the late Interiors, and in Modern Room (Study) he presents an image which seems to reference one of Andy Warhol’s famous depictions of Chairman Mao. Displayed prominently beside a bookshelf, the inclusion of China’s twentieth-century Communist leader amidst the hedonistic display of luxury décor laces the work with a further layer of irony.

In Modern Room (Study), Lichtenstein’s interior is rendered without any signs of human habitation: glossily perfect in its pristine and untarnished order, the work focuses solely on the commercial products of comfortable consumerism. In this respect, it is evocative of Richard Hamilton’s seminal collage of 1956, Just what is it that makes today’s homes so different, so appealing? Considered one of the earliest manifestations of Pop art, Hamilton’s prophetic collage depicts an interior awash with the latest ‘must-have’ appliances for the ideal home and saturated with the over-inflated desires and beauty stereotypes propagated by consumer society.

Lichtenstein’s late Interiors present a similarly ‘idealised’ version of daily life in the modern home updated for the 1990s: the popping, synthetic colour scheme sardonically hints at the unattainable allure of the great American Dream. As Cassandra Lozano writes, “The interior paintings portray upper middle-class living rooms overstuffed with furniture and fine art of uncertain provenance. The consumer society that Lichtenstein depicted in his Pop paintings of the sixties became, in his nineties interiors, a world of consumer excess” (Cassandra Lozano in: ibid., p. 26).

With its impressive scale, stylised composition, and appropriated subject matter, Modern Room (Study) is also in dialogue with the work of the Pictures Generation artists. Working in the 1980s and 1990s, artists such as Louise Lawler, Cindy Sherman and Richard Prince similarly sought to explore and expose the singular characteristics of their contemporary moment through their rich and interrogative oeuvres. In referencing Warhol’s Mao, the present work recalls Lawler’s renowned 1984 photograph, Living Room Corner, Arranged by Mr. & Mrs. Burton Tremaine, New York City, which immortalises, in a freeze-frame shot, the Tremaines home where everyday domestic items live alongside works of high art; for example, a Robert Delaunay painting and a sculpture by Lichtenstein are accompanied by a now-outmoded television set. Noting the deliberately large scale employed in his Interior series, Lichtenstein explained: “We wanted those interiors to be large, so they would make you feel as though you could walk into them, but they’re so stylised that you obviously don’t think it’s reality, but when you make it about life size, something peculiar happens when you stand in front of an interior” (Roy Lichtenstein in conversation with David Sylvester, 1997 in: ibid., p. 36).

The return to the theme of interiors, some thirty years after its original conception, signifies the vital importance of the series within Lichtenstein’s artistic canon as a whole. Indeed, in its masterful union of style, technique and subject matter, Modern Room (Study) is a superlative example of one of the artist’s most accomplished and celebrated bodies of work.