Lightness of Being (Blue) by Chris Levine 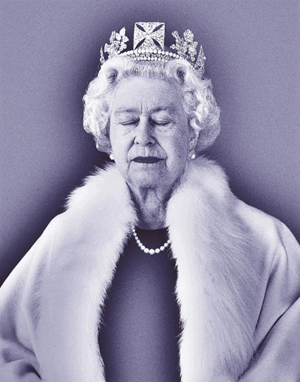 In 2003 light artist Chris Levine set up a shoot for Her Majesty at Buckingham Palace.

In 2003, on 14th November light artist Chris Levine set up a shoot for Her Majesty in the Yellow Drawing Room at Buckingham Palace. He had been commissioned by the Jersey Heritage Trust to create a portrait of Queen Elizabeth II that was to be the first ever holographic portrait of Her Majesty.

The portrait of HM the Queen was to mark 800 years of allegiance to the Crown by the Island of Jersey. It was an incredible moment for the artist, born to a Canadian father and a Scottish mother, the portrait would be career-changing.

Prior to the day, Levine had been asked by the Queen's stylist what he would like Her Majesty to wear. Levine selected the diamond diadem that was made in 1820 for George IV, and worn by the Queen on the way to her coronation, the crown that is seen on coins and postage stamps.

''It was daunting, the most portrayed woman in history and the subject of so many seminal artists. I wanted to make a portrait that was an evolutionary step forward from all that had been created to date. It was a challenge to which I applied my heart and soul.'' - Chris Levine on Photographing the Queen, Sotheby's, March 2017.

On the day, Chris was able to capture over 8,000 images of the Queen from two sittings. In a private audience with the Queen at Windsor, the artist sat down with the monarch to discuss which photographs to select for the Jersey Heritage Trust commission.

In 2011, the piece, entitled Equanimity, was presented to the National Portrait Gallery by the people of Jersey in 2011. The Queen's elegance and calm inspired the title, as equanimity means to achieve a level of liberating stillness.

In 2012, the image of the Queen was repurposed in a new work, The Diamond Queen, featuring 1 100 white diamonds, created in partnership with Asprey. The portrait also featured on a holographic £10 Jersey stamp and the £100 Jersey banknote.

Lightness of Being (Blue)