The inimitable style of Philip Maliavin, who was highly influenced by impressionism, expressionism and the new trends of modernism, is apparent not only in his paintings of "Babas" - peasant women - but also in his more formal portraits.

The inimitable style of Philip Maliavin, who was highly influenced by impressionism, expressionism and the new trends of modernism, is apparent not only in his paintings of "Babas" - peasant women - but also in his more formal portraits.

Famous for his prolific drawings and paintings glorifying rural womenfolk, Maliavin was also an adherent of the portrait genre. Employing his own particular brand of creativity, he skilfully and truthfully sculpted the likenesses of his contemporaries, painting not only peasant girls, but also members of the imperial family, the great and the good of Europe, the intelligentsia, artists and the political elite. 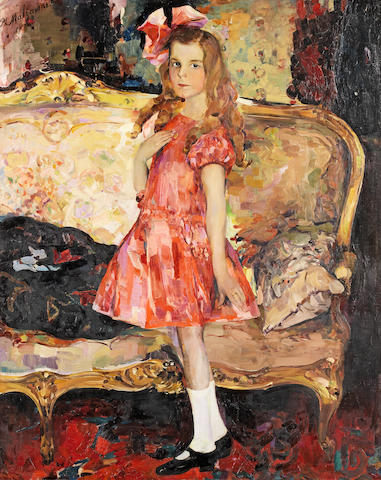 Philip Andreevich Maliavin (Russian, 1869-1940), Portrait of a young girl in a pink dress

The son of a peasant, Maliavin studied in Ilya Repin's studio at the Imperial Academy of Arts in St. Petersburg, at first imitating his professor's style but very quickly embarking on a search to resolve the problems of how to express peasant themes through the use of bold and rich colour. His ground-breaking painting 'Laughter' (1900) rejected by the Committee of Professors of the Academy eventually secured Maliavin recognition and a gold medal at the Paris World Exhibition. This painting marked the beginning of the evolution of Maliavin's style – a definitive departure from the outdated academic prescription. The abstract, dynamic colourisation, complementary colours and large format was the artist's innovative hallmark. The next logical step for the artist was to participate in the 1906 exhibition of the association of the "World of Art", at which his painting Whirlwind was shown, and the impact of this work is vividly described in Mikhail Nesterov's letter to E.A. Prakhova:

"The veritable talent of this son of the earth perhaps has no equal among all the rest which has emerged since the foundation of the Academy of Arts and the arrival of our style of art. His "artistic" sensibilities are so subtle, new and bright and so unexpectedly brave that I, still - although not old in artistic terms - feel that we belong to an outdated "era" (it is both painful and joyful) "(M V. Nesterov to E. A. Prakhova, St. Petersburg, November 7, 1899, Archive E. A. Prahova, Kiev).

Despite the fact that the offered lot, Portrait of a girl in a pink dress belongs to a later period of the artist's work and was executed in emigration, it is clear that Maliavin continues to address the same stylistic challenges which preoccupied him at the beginning of the 1900s.

In 1922, Maliavin left Russia to participate in a travelling exhibition of his work. After exhibiting in Germany and Italy, the artist settled in Paris among a circle of artists familiar to him. Maliavin's experiments in colour and chiaroscuro, his efforts to divest form of colour and to evolve its expression brought his stylistic development closer to the international artistic trends of the time. Subsequently he was propelled into the limelight during this period of emigration. His exhibitions were well received by the public and helped to grow the number of private commissions he garnered.

The extensive geography of the countries in which the artist worked in the 20s and 30s (Belgium, UK, Italy, USA, France, Czechoslovakia, Yugoslavia, Norway, etc.) serves to emphasist the success of Maliavin in the field of salon portraiture of aristocratic families and the gentry.

Maliavin's formal portraits, including the offered lot in which the style of John Singer Sargent resonates, are distinguished by an subtle understanding of colour and a broad, confident and energetic brushstroke, complemented by a detailed study of the sitter's face rendered in a large format.

In Portrait of a girl in a pink dress which was most probably commissioned by one of Europe's aristocratic families, the artist reveals himself to be an excellent colourist, subtly conveying a palette of warm red and pink hues. Maliavin successfully creates a picturesque mosaic on canvas: the bright colour planes - connected by the large and textured brushstroke of the master – take on the form of dynamic, all-embracing masses of colour. The richness of the colour, combined with the shade, dominates the spatial composition: the girl's figure does not stand against the background, but rather merges with it. At the same time, her knowing and rather adult face contrasts with her coquettish pose and childish hairstyle and her piercing gaze dominates the portrait. The entire background, including the clothing and bow of the child become subordinate to an overwhelmingly adult impression. The dynamism of the blend of these colourful masses appears to be balanced by the "restraint" of the depiction of the sitter. The technique used by the artist to concentrate attention on the face, combined with the "incompleteness" of the background, brings the portrait closer to the aesthetics of modernity. Just as with Maliavin's 'Babas' - where the focal point of the painting becomes the enthralling, eye-catching gaze of the women - in the offered portrait, all the activity of the composition is concentrated on the immovable face and soulful look of the girl. Stylistically, the offered lot is closest to Maliavin's portraits of M. Balashova (1924) and the singer N. Plevitskaya (1929).

The artistic voyage of discovery which the artist embarked upon with the peasant theme, preoccupied him until the end of his life and even influenced the mode of expression of his other work, such as his formal portraits, of which the offered lot represents a rare appearance on the auction market.

Acquired by the present collector in the USA, circa 1960s