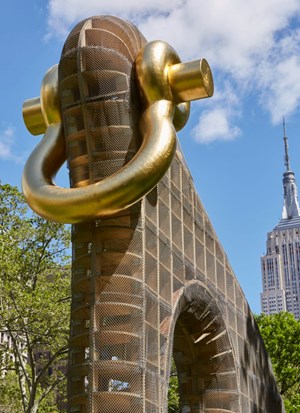 Madison Square Park Conservancy, in cooperation with the U.S. Department of State’s Bureau of Educational and Cultural Affairs, announced today that Martin Puryear will represent the United States at La Biennale di Venezia 58th International Art Exhibition. Puryear is recognized for a fiercely independent visual language of object making that has developed over a half-century, and for a sculptural practice that has influenced generations of artists. On view May 11 through November 24, 2019, the Biennale will mark a major international presentation for the artist, whose work has remained at the forefront of American creativity and who will create new site-specific pieces for the U.S. Pavilion.

Puryear will create an entirely new body of work for the U.S. Pavilion, including new sculpture and a site-specific outdoor installation for the Pavilion’s forecourt. Puryear’s work summons disparate sources of inspiration to realize a coherent vision that culls and clarifies across cultures, continents, eras, and perspectives. In conjunction with the presentation at the U.S. Pavilion, the Conservancy and Puryear will realize outreach programs with underserved youth through a collaboration between Studio Institute of Studio in a School Association, Inc. in New York and Istituto Santa Maria Della Pieta in Venice.

As the dedicated exhibition scholar, Darby English, the Carl Darling Buck Professor at the University of Chicago, will collaborate with Rapaport on text panels and interpretive materials related to the exhibition. He will also author a major essay in the exhibition catalogue. Tod Williams Billie Tsien Architects will serve as exhibition designers, working with Puryear and Rapaport on the layout of objects in the interior galleries and outdoor forecourt. Paula Scher of Pentagram will realize exhibition and catalogue graphic design. The catalogue will be published by Gregory R. Miller & Co., and Anne M. Wagner, Professor Emerita at the University of California, Berkeley, will write a catalogue essay.

The 2019 U.S. Pavilion: Martin Puryear is made possible by The Bureau of Educational and Cultural Affairs of the U.S. Department of State, The Ford Foundation, The Jacques and Natasha Gelman Foundation, and Matthew Marks Gallery. Additional support is provided by The Josef and Anni Albers Foundation and The Charina Endowment Fund.

ABOUT THE ARTIST
Born in 1941 in Washington, D.C., Martin Puryear is an American sculptor whose work is recognized for the subtlety and power of its form and inherent symbolism. Puryear’s work is in the permanent collections of major museums across the U.S. and internationally. He represented the United States at the 1989 Bienal de São Paulo, where he was awarded the festival’s Grand Prize, and his work was included in the 1992 Documenta IX. Recent exhibitions include a solo exhibition at the Museum Voorlinden, The Netherlands (2018); and an exhibition of his drawings, Martin Puryear: Multiple Dimensions, at the Morgan Library & Museum in New York (2015), that later traveled to the Art Institute of Chicago and the Smithsonian American Art Museum in Washington, D.C. Puryear was also commissioned to present a major sculptural installation, Big Bling, by Madison Square Park Conservancy (2016). The Museum of Modern Art, New York organized a retrospective of Puryear’s work in 2007, which traveled to the Modern Art Museum of Fort Worth, Texas; National Gallery of Art, Washington, D.C.; and San Francisco Museum of Modern Art.

Puryear earned his B.A. from Catholic University of America, Washington, D.C. (1963) and his M.F.A. from Yale University (1971) and attended the Swedish Royal Academy of Art (1966-68). He has been the recipient of prestigious awards, including the Skowhegan Medal for Sculpture (1980), a Louis Comfort Tiffany Grant (1982), and a MacArthur Foundation Fellowship (1989). He was elected to the American Academy of Arts and Letters (1992) and was awarded an Honorary Doctorate from Yale University (1994) and the National Medal of Arts (2011).

Puryear attended segregated public schools through the sixth grade and spent his childhood exploring the collections of the National Gallery of Art and the Smithsonian’s National Museum of Natural History. His early years as an artist—the 1960s and 1970s—were a period of racial and political unrest in the United States. He responded by developing a rigorous methodology and created work imbued with symbolism and subtlety. While serving in the Peace Corps in Sierra Leone from 1964 to 1966, Puryear learned local woodworking and carpentry techniques, consolidating and refining his skills in subsequent years through the study of Japanese architecture and garden design, Native American canoe and Greenland kayak construction, and furniture making (both Scandinavian modernist and Shaker). These experiences unified into the signature style for which Puryear is known today. Puryear lives and works in the Hudson Valley region of New York.