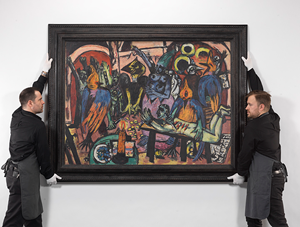 Birds’ Hell (Hölle der Vögel) is ‘an allegory of Nazi Germany. It is a direct attack on the cruelty and conformity that the National Socialist seizure of power brought to Beckmann’s homeland. Its place in Beckmann’s oeuvre corresponds to that occupied by Guernica in Picasso’s artistic development. It is an outcry as loud and as strident as an artistic Weltanschauung would permit. Not since his graphic attacks in Hunger and City Night in the early twenties had Beckmann resorted to such directness, such undisguised social criticism. Birds’ Hell is Beckmann’s J’accuse’ (S. Lackner, Max Beckmann, New York, 1977, p. 130).

Painted with vigorous, almost gestural brushstrokes and bold, garish colours, Bird’s Hell envelops the viewer in a sinister underworld in which monstrous bird-like creatures are engaged in an evil ritual of torture. Presiding over the scene is a multi-breasted bird who emerges from a pink egg in the centre of the composition. To her right, a crouching black and yellow bird looms over golden coins spread before him, while behind the central figure, a group of naked women stand huddled together. Heightening the sense of hysteria is the group of figures standing within a glowing, blood red doorway to the left of the composition. Guarded by another knife-wielding bird, they return the bird-woman’s gesture, their right arms raised in unison in the same furious salute. At the front of the scene, a naked man – the symbol of innocence within this reign of terror – is shackled to a table, held down by another bird that is slashing his back in careful, horizontal lines.

Continuing the Germanic tradition of the depiction of hell, this painting echoes the gruesome allegorical scenes of Hieronymus Bosch’s famed The Garden of Earthly Delights, while at the same time, takes aspects of Classicism and mythology to turn reality into a timeless evocation of human suffering. In this way, Bird’s Hell, like Pablo Picasso’s Guernica or Max Ernst’s Fireside Angel of the same period, transcends the time and the political situation in which it was made to become a universal and singular symbol of humanity.