On 2 July, Phillips will offer Joan Mitchell’s Noël in the 20th Century & Contemporary Art Evening Sale in New York. This uplifting work of explosive color, dripping fields of paint and rapid brushstrokes is exemplary of Mitchell’s rich painterly language, and hails from her highly acclaimed body of work from the early 1960s.

Robert Manley, Deputy Chairman and Worldwide Co-Head of 20th Century & Contemporary Art, said, “Joan Mitchell’s large scale paintings from this period are rarely seen on the auction market, and it is an honor to present Noël as a leading highlight of our July Evening Sale. Appreciation of her work has quickened over the last few years, during which we have seen some of her highest prices ever achieved at auction. As the Baltimore Museum of Art and SFMoMA work to co-organize a major survey of her artistic career, this is a moment of collective and worldwide recognition of Mitchell’s legacy as one of the great artists of the 20th century.”

Noël shows the influence of French painters such as Monet and Cezanne, as well as her peers Willem de Kooning, Yves Kline and Jackson Pollock. This master painting is a significant example from the renowned body of work created in her studio on rue Frémicourt between 1960 and 1962. This was a time of great emotional intensity for Mitchell – her mother was diagnosed with cancer in 1960, and her relationship with Jean-Paul Riopelle was volatile. These paintings, some of the most brilliant and expressive of her career, are reflections of both the milieu that surrounded Mitchell in France and the turbulence of her personal life.

Jill Weinberg Adams, who worked with Joan Mitchell at Xavier Fourcade’s gallery when the painting was exhibited has said, “Noël is part of an astonishing cycle of work that was first exhibited at Kornfeld and Klipstein in Bern, Switzerland in 1962. Other than Hawks at 3 O’Clock, bought at the time by Mitchell’s friend Sam Francis, the paintings remained in storage in Switzerland until Fourcade brought them to New York and exhibited a selection of them in 1985, including Grandes Carrières, 1961-1962, Museum of Modern Art, New York, and Cous-cous, 1961-1962, Currier Museum of Art, Manchester, New Hampshire. Noël was in that show and it was a great privilege for me to experience its power at a time when interest in Mitchell’s historical work was beginning the surge that continues unabated today.” 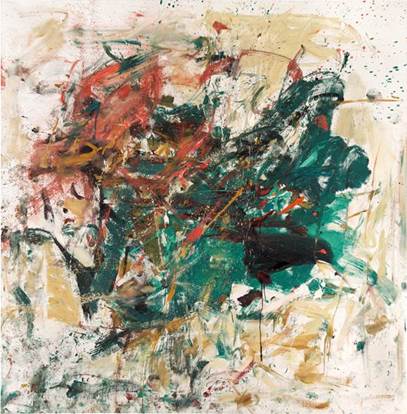