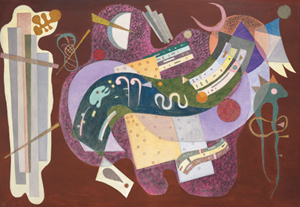 Christie’s is pleased to announce complete details of its upcoming Evening Sale of Impressionist & Modern Art on November 16. Forty-nine works by the major artists of the era, including Wassily Kandinsky, Pablo Picasso, Claude Monet, Chaim Soutine, Paul Cézanne, among others. The evening sale is expected to achieve in excess of $200 million.

As was previously announced, highlights of the sale include Wassily Kandinsky’s Rigide et courbé (Rigid and Curved) (estimate: $18-25 million), undoubtedly the most important Paris period painting by Kandinsky to ever appear on the market; Claude Monet’s Meule (Grainstack) (estimate on request), one of the culminating and finest examples of Monet’s Grainstack series; and Christie’s are thrilled to announce the sale of Chaim Soutine’s Le garçon d’étage (estimate: $6-9 million), a prime example from the artist’s great series of Parisian hotel workers and two works by Paul Cézanne, demonstrating the artists mastery of both watercolor, Théière et oranges (La Nappe) (estimate: $8-12 million), and oil, Paysage avec route et clocher (Île de France près de Melun)(estimate: $10-15 million), his favored subjects of the French landscape and still life.

In keeping with increasing demand for major works by Pablo Picasso, the most heralded artist of the 20th century, Christie’s will offer a diverse selection of 11 Picasso works from various collections, showcasing the artist’s major themes, varying styles and his many muses-- from two powerful portraits of his muse Dora Maar to a whimsical and oversized work of a seated man from his great late series, and a uniquely painted ceramic sculpture of an owl from the Nelson A. Rockefeller Collection.