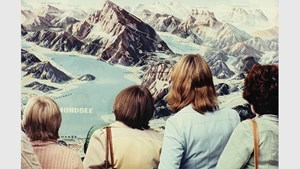 The Museo Reina Sofía has prepared a wide range of cultural events for next autumn...

The Museo Reina Sofía has prepared a wide range of cultural events for next autumn, in which stands out Paris in spite of everything. Foreign artists, 1944-1968, an exhibition that will try to bring the public closer to the complex but interesting art scene developed in Paris after the Second World War, where an outstanding cultural production was made, often forgotten. The exhibition includes works by foreign artists based in the French capital such as Picasso, Kandinsky, Ellsworth Kelly, Palazuelo, or Tinguely, among many others.

On the other hand, on the occasion of the celebration of the 40th anniversary of the Spanish Constitution of 1978, the exhibitions Poetics of Democracy: Images and Counterimages of the Transition, which will be held in the Museum itself, and The Power of Art, which will take place in the Congress and the Senate, have been programmed. The exhibitions will bring visitors closer to the artistic practices carried out in Spain since that time through works by artists such as Cristina Iglesias, Concha Jerez, Antoni Muntadas, Ignasi Aballí, Juan Muñoz, and Esther Ferrer.