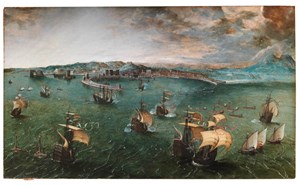 The creation of Naval Battle in the Gulf of Naples (1558-1562), a painting in the collection of the Palazzo Doria Pamphilj in Rome, has been attributed to Pieter Bruegel the Elder.

The creation of Naval Battle in the Gulf of Naples (1558-1562), a painting in the collection of the Palazzo Doria Pamphilj in Rome, has been attributed to Pieter Bruegel the Elder.

The resemblance in craftsmanship and technique to Bruegel’s oil painting The (Little) Tower of Babel, currently held in the collection of the Boojmans van Beuningen museum in Rotterdam, is astonishing. 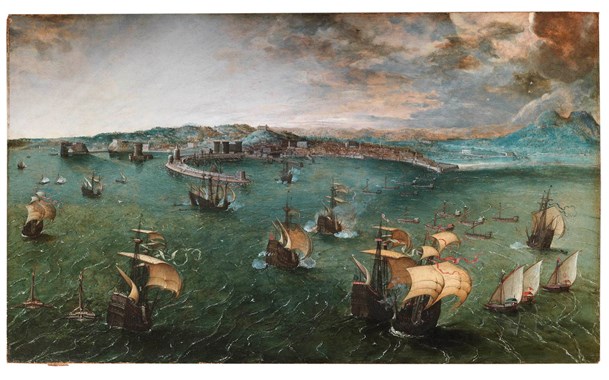 After viewing the restored piece, Elke Oberthaler, Sabine Pénot, Manfred Sellink and Ron Spronk, the curators of the Breugel exhibition in the Kunsthistorisches Museum (KHM Vienna, Austria) are convinced that the Naval Battle in the Gulf of Naples can be credited as the work of Pieter Bruegel the Elder.

Manfred Sellink announced at a press conference at the KMSK in Brussels, a conclusion will become evident by the agreement of visitors when the work is exhibited alongside other works of Bruegel at the Bruegel exhibition in the Kunsthistorisches Museum in Vienna.