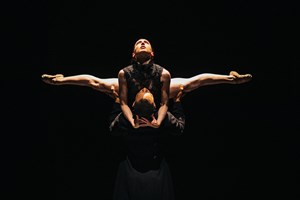 The evening dedicated to Nederlands Dans Theater 2 at Berliner Festspiele included mutual comfort by Edward Clug, Sad Case and Subtle Dust by Sol León & Paul Lightfoot, and Wir sagen uns Dunkles by Marco Goecke. 2018 marks the 40th anniversary of the second company to NDT. Originally brought to life with the purpose of feeding the first company with young talent, NDT 2 was founded in 1978.

2018 marks the 40th anniversary of the second company to NDT. Originally brought to life with the purpose of feeding the first company with young talent, NDT 2 was founded in 1978. In three years, NDT 2 prepares sixteen classically trained dancers by offering a varied repertoire consisting of eclectic works. Here a review of four of them.

Mutual comfort with Tess Voelker, Thalia Crymble, Adam Russell-Jones and Kyle Clarke is a clean, sharp, complex twine. A corporeal mechanism composed by twists, lifts, pushes, pulls and controlled collapses, shows an outstanding working apparatus. As driven by a tangled dynamic, they use their physical strength and resistance generating lightness and a sense of reassuring perfection. They weave together before they wiggle out of each other in a stunning composition that generates suspense and amusement. The execution is superlative, the skills and the professionalism of the dancers noteworthy. Punctual, correct, sharp. The fluidity of the bodies is remarkable and the excellence of the complex and precise movements, that appear as a motion riddle, is accurate in every part. Like clocks with long and precise hands, the dancers alternate in exact, rhythmic, clear and consequent movements. They balance and support each other in a creative composition very pleasant to look at. 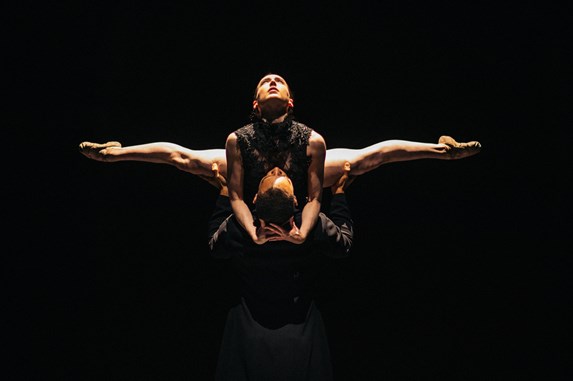 Sad Case by Sol León & Paul Lightfoot danced by Fay van Baar, Amanda Mortimore, Toon Lobach, Surimu Fukushi and Boston Gallacher is a grotesque piece that brings back to the late ’90. The choreography in fact, created in the 1998, appears as outdated but thinking about it a bit longer comes to mind that what we see there and that seems to belong to the past, is actually something that is a consistent part of the contemporary pop-mainstream trend. The performers act like clowns just emerging from the earth's crust, soiled with mud and bleached by the earth and dust encountered, while they tease each other. They also remind pupils playing with their first sexuality. Constant references to the genitals and aspects of comedy burlesque lead to think of the frivolity and hilarity of the clowns or boys in the pre and early puberty in search of their identity and curious, but at the same time frightened and insecure, in the world of sexuality. The music, the costumes and the repetitive silly movements are sprinkled by a retro dust but as mentioned earlier, what happened in the past, quite often, comes back and reveal it self in the present.

Wir sagen uns Dunkles with Thalia Crymble, Nicole Ishimaru, Tess Voelker, Fay van Baar, Donnie Duncan jr., Surimu Fukushi, Toon Lobach, Kyle Clarke, Jesse Callaert, Boston Gallacher and Adam Russell-Jones is composed by a varied and variable range of movements. Multiple dance languages are used in a composition that explicate vulnerability and strength at the same time. As if struggling to make up for deficiencies or to survive the tragedies of the world, they move with different intensities and styles, adopting diversified techniques that are danced with extreme precision. There is a kind of spirit that comes out, a force that makes them move from within, something that compels them to be fragile and powerful, tremble yet strengthens, driving them into vulnerability and determination at the same time. The bodies are able to jump over diverse dance genres appearing strong and flexible, changeable though steady, capable and humble in their multi-faceted mobility. What if in a few years the arts would be the only place where to feel and be safe? They seem to fight darkness coming from the outside world and maybe from part of their insights as well. How to obstruct these forces and how to survive them? And do they hinder themselves and the others, or are they supporting one another? All of them appear motivated to remain in a reality that although precarious, is the only one in which they feel safe, in which they can communicate. The world outside falters and threatens but the world inside, the world of dance, helps to become stronger facing weaknesses and fragilities in their whole. 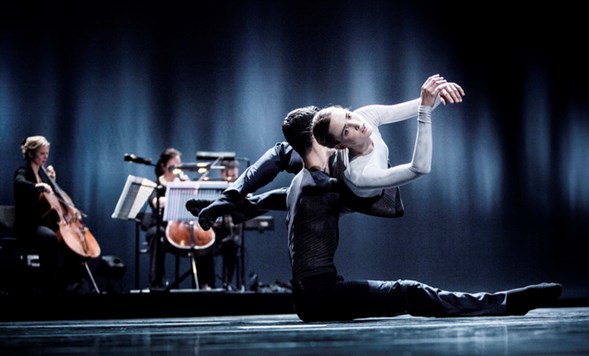 Subte Dust performed by Fay van Baar, Amanda Mortimore, Thalia Crymble, Surimu Fukushi, Toon Lobach, Donnie Duncan jr, Kyle Clarke and Jesse Callaert is a meeting in the twilight. A rounded light on the floor is the reflection of the moon that illuminates only a few things. As accomplices of a misdeed, the performers meet and disperse on the stage with sinister and obscure features. What is the circumstance? What’s the mystery within the dark scene? Characters with theatrical costumes invade the space on two levels and the dynamics among them remain uncertain and eventually unknown. Like a seventeenth-century novel, the characters take on austere, mysterious, and frightening appearance. The beauty of large movements in peculiar outfit generates a filmic scenario fully immersed in a dim narrative and extended shadows.

The result of the NDT2 venue reiterates the competence of excellently skilled dancers that not only performed superbly and persuasively diverse genres, but also sublimely embodied the creations and visions of very dissimilar choreographers.