Neue Nationalgelerie in Berlin being refurbished 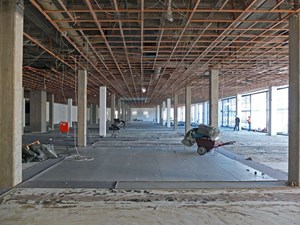 "The refurbishment of the Neue Nationalgalerie is a very detailed process; it includes the refurbishment of all the constructional elements, the restoration of the visible surfaces, the renovation of the building facilities, and an improvement of the service areas. The Project team around the Federal Office for Building and Chipperfield Architects for this significant repair project liaise closely with the Landesdenkmalamt (Berlin Office for Monument Protection). The common goal is to preserve the visual aspect of the building and retain as much of the historical structure as possible." - Birgit Jöbstl, Director of Press, Prussian Cultural Heritage Foundation

Artdependence Magazine: What are the most important challenges faced by the project?
Birgit Jöbstl: The biggest challenge until today were the enormous glass windows. The window panes are the widest panes Mies van Rohe ever used in one of his buildings. In the 1960s, they were made in France.
Today, there is only one company worldwide which can produce window panes of this size, and it is located in China. Thus, the window panes have to be produced in China and will be transported to Berlin. We've had one exemplary pane produced, transported and implemented in 2014.
AD: What is to be expected from the new museum?
BJ: The opening of the Neue Nationalgalerie after its refurbishment is scheduled for 2020. The Mies-building was built for the Nationalgalerie collection "Art of the 20th Century". Highlights from this collection with a strong focus on early modernism will be presented at the re-opening. In the upper hall, a specifically designed for this unique space exhibition will be staged. Names and programs, however, will not be published before 2019.