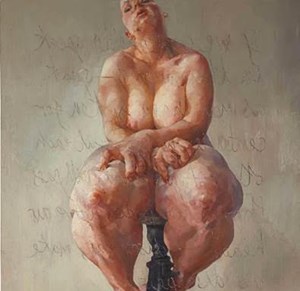 One of the most important paintings by a British artist of the last thirty years, Propped – a superlative self-portrait that shatters canonised representations of female beauty – propelled a young Jenny Saville to renown. Yesterday night at Sotheby’s in London, eight bidders vied for the the remarkable painting in a bidding battle lasting more than 10 minutes, propelling the price to £9.5 million / $12.4 million / €10.8 million (est. £3-4 million) - a new auction record for any artwork by a living female artist.

One of the most important paintings by a British artist of the last thirty years, Propped – a superlative self-portrait that shatters canonised representations of female beauty – propelled a young Jenny Saville to renown. Yesterday night at Sotheby’s in London, eight bidders vied for the the remarkable painting in a bidding battle lasting more than 10 minutes, propelling the price to £9.5 million / $12.4 million / €10.8 million (est. £3-4 million) - a new auction record for any artwork by a living female artist. 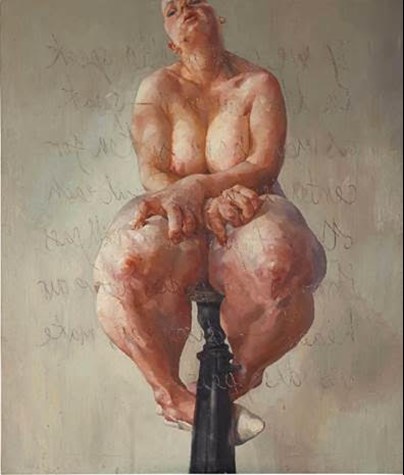 The painting was offered from the collection of visionary collector, patron and museum trustee, the late David Teiger. Proceeds will benefit Teiger Foundation – soon to be one of the world’s largest and most significant contemporary art foundations.

Painted in 1992, Propped compelled collector Charles Saatchi to acquire every work by the artist that he possibly could, and subsequently included it in the pivotal 1997 exhibition, Sensation: Young British Artists from the Saatchi Gallery at the Royal Academy of Art. Sensation truly introduced Saville to the British public and the provocative nature of the exhibition sparked record queues and a media frenzy.

Alex Branczik, Sotheby’s Head of Contemporary Art for Europe, said: “Sensation was the most provocative and ground-breaking exhibition of contemporary art that Britain had ever witnessed. As a posterchild for this show, Propped stands alongside epoch-defining pieces by Damien Hirst, Tracey Emin and Chris Ofili as one of the most important works of our time. Encapsulating all the brilliant painterly defiance that characterises Saville’s work, Propped is the most important painting by the artist ever to come to auction.”

The auction debut of Saville’s Propped follows the successful sale of the artist’s monumental Shift in June 2016 (est. £1.5-2 million), which tripled the auction record for the artist when it sold for £6.8 million to The Long Museum, Shanghai.

The primary subject of all of Saville’s early works is the artist herself, and indeed throughout her oeuvre she has almost exclusively painted female subjects. In doing so, she has sought to interrogate prescribed notions of beauty, specifically a cultural aversion to corpulence. Recalling the influence of a host of art historical masters, from Rubens and Rembrandt to Willem de Kooning and Lucian Freud, Saville inserts herself into the tradition of the female nude – distorting and inverting this relentlessly male convention.

One of only two paintings from the period in which Saville directly incorporated text into her work, Propped depicts a woman gazing at her reflection in a clouded mirror. Gouged across the surface in a fashion reminiscent of Cy Twombly, is a quote from an essay by the French feminist Luce Irigaray, which interrogates the way in which men and women interact. Irigaray posits that men use women as mirrors, forcing them to fill an impotent reflective role in order to satisfy male narcissism. In the painting, the quote is inverted and illegible – intended for the subject’s consumption, as opposed to the viewers’. Propped was first displayed at Saville’s degree show in Edinburgh in May 1992, with a mirror hung opposite it at a distance equal to the height of the painting; this allowed the viewer to turn away from the painting and implicate themselves in the artwork.

However, any message of empowerment is tempered by an evident degree of self-loathing; Saville's figure claws at her flesh, struggling to exist within the narrow confines of the role prescribed to her by a patriarchal society, failing to reflect back at men the sanitised image of beauty that is demanded of her. As the artist has pointed out, she “grew up as a teenager in the 80s, when body regulation became huge… we had a cultural obsession with the body”.