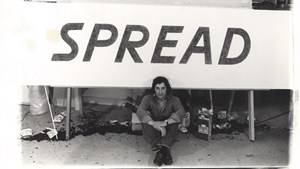 Ed Ruscha: Buildings and Words is a short-length documentary, commissioned by MOCA, about Ruscha’s extraordinary body of work.​ The film is written and directed by Felipe Lima and narrated by Owen Wilson.

Ed Ruscha: Buildings and Words is a short-length documentary, commissioned by MOCA, about Ruscha’s extraordinary body of work.​ The film is written and directed by Felipe Lima and narrated by Owen Wilson.

The release of the documentary coincides with the two exhibitions at Gagosian Gallery in California: ED RUSCHA, PRINTS AND PHOTOGRAPHS and ED RUSCHA, BOOKS & CO. “Ed Ruscha Prints and Photographs,” a survey of Ruscha's prints over forty years, together with rarely seen photographs produced since 1959 is organized by Gagosian director Bob Monk and follows earlier iterations at Gagosian New York and Paris during the last two years. The exhibition will be presented in conjunction with “Ed Ruscha Books & Co.”

The quartet of gas stations Standard Station, Mocha Standard,Cheese Mold Standard with Olive, and Double Standard (1966–69) merge Euclidean space with Renaissance perspective and word-play, while depictions of the Hollywood Sign and its surrounding hills convey an attitude to the region's landscape, at once scientific and romantic, natural and artificial. “’Hollywood’ is like a verb to me,” Ruscha once commented. “It's something you can do to any subject or anything”: his prints of the past four decades are random yet refined expressions of this unrestricted approach.

More information about the exhibition is here.