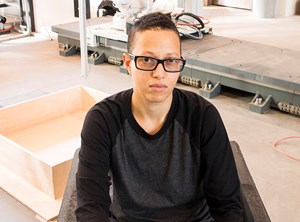 Lisa Phillips, Toby Devan Lewis Director, and Karen Wong, Deputy Director of the New Museum, cofounders of IdeasCity, today announced the appointment of V. Mitch McEwen as Curator of IdeasCity, the institution’s high-profile, multi-pronged initiative that explores the future of cities with culture as a driving force.

Lisa Phillips, Toby Devan Lewis Director, and Karen Wong, Deputy Director of the New Museum, cofounders of IdeasCity, today announced the appointment of V. Mitch McEwen as Curator of IdeasCity, the institution’s high-profile, multi-pronged initiative that explores the future of cities with culture as a driving force. IdeasCity is a collaborative, creative enterprise that—through conferences, workshops, commissions, projects, and exhibitions—investigates key issues, proposes solutions, and seeds concrete actions around a convening of an international network of thought leaders and cultural activists. IdeasCity builds on the New Museum’s mission of “New Art, New Ideas” by expanding the Museum beyond its walls into the civic realm. The Curator is a two-year appointment linked to the biennial presentation of IdeasCity in New York and is responsible for the two-year cycle leading up to this presentation. As Curator of IdeasCity, McEwen will steer the framework for the 2018–19 cities and launch an open call for cities around the world to apply for the 2020–21 cycle.

When IdeasCity began in 2011, there were few conferences on urban futures and none sponsored by a museum. During its relatively short life span, IdeasCity has grown into a unique and robust platform that addresses some of the major challenges and opportunities facing cities around the world today. IdeasCity partners with like-minded cities that believe culture is fundamental to urban growth and innovation; the initiative has taken place in New York (2011, 2013, 2015, 2017), Istanbul (2012), São Paulo (2013), Detroit (2016), Athens (2016), and Arles (2017).

The next IdeasCity will take place in Toronto on September 15, 2018, in partnership with the Bentway. In the spring of 2019, IdeasCity will be in New Orleans.

V. Mitch McEwen is principal and cofounder of A(n) Office, a collaborative of design studios in Detroit and New York. McEwen’s work has been awarded grants from the Graham Foundation, the Knight Foundation, and the New York State Council on the Arts. A(n) Office and McEwen have been commissioned by the US Pavilion at the Venice Architecture Biennale, the Museum of Contemporary Art Detroit, and the Istanbul Design Biennial. McEwen’s work in urban design and architecture began at Bernard Tschumi Architects and the New York City Department of City Planning; she also founded the Brooklyn-based nonprofit SUPERFRONT. Since 2017, she has been Assistant Professor at Princeton University School of Architecture, having previously taught at the University of Michigan and Columbia Graduate School of Architecture, Planning and Preservation. McEwen serves as a board member of the Van Alen Institute in New York.