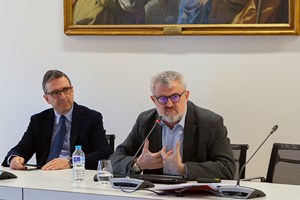 The role of women in painting and Colonial Art are the major exhibitions projects at the Museum in 2020. Mythological Passions, Carracci. The Herrera chapel, William Blake. Illustrations for the Divine Comedy, Marinus and The Cases for the Dauphin’s Treasure complete the programme of temporary exhibitions.

The role of women in painting and Colonial Art are the major exhibitions projects at the Museum in 2020.

Mythological Passions, Carracci. The Herrera chapel, William Blake. Illustrations for the Divine Comedy, Marinus and The Cases for the Dauphin’s Treasure complete the programme of temporary exhibitions.

Also continuing are the travelling exhibition programmes “The Prado on the Street”, “Touching the Prado” and “Art and Myth”. 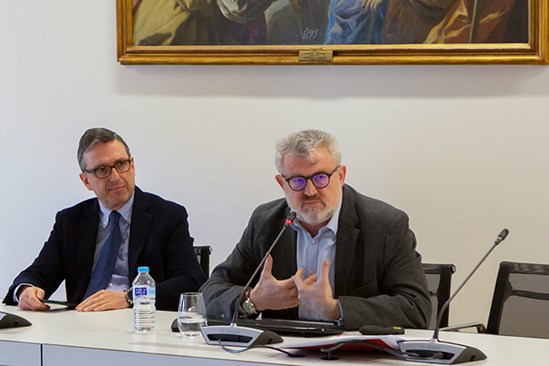 Educational activities, cultural action initiatives and technological advances aimed at reaching an ever broader public will all increase in number.

“After a successful celebratory year it’s time to return the focus to the Permanent collection and its importance, emphasising the potential for it communication. With this aim in mind, this year we will be developing the concept of “New publics, new narratives” as the key concept underlying our principal exhibitions.”

Awkward guests (31 March to 6 September 2020) marks a further step in the rediscovery of the role of women in painting that began with the exhibition A Tale of two Women Painters (still on show). This new exhibition focuses on the role of women in the Spanish art system of the 19th and early 20th centuries. Largely organised by the Museo del Prado, it will reveal the way the image of women was subordinated to male talent, legitimised by the State through prizes, exhibitions and museums. In a second section, the display of some of the most important works of art produced by women in Spain during the period in question will present an essential mapping of the subsidiary role that this system conceded to women and the epic journey that some had to undertake in order to free themselves of these limitations.

Return Journey. Ibero-american art in Spain (17 November 2020 to 21 March 2021) will open up the Museo del Prado to “new geographies” in its exhibition programme. The return journey that gives the exhibition its title is a term that allows for an appreciation of the artistic contribution made by the New World to Spain and by extension to Europe. The aim of this exhibition is to draw attention to the rich artistic heritage from South America housed in cultural and religious institutions and private collections, particularly in Spain.

The temporary exhibition programme is completed with further events devoted to Annibale Carracci (16 June to 20 September 2020) and to the group of mural paintings that decorated the Herrera family’s chapel  in the church of San Giacomo degli Spagnuoli in Rome, organised in collaboration with the MNAC in Catalonia; an exhibition on the work of Marinus van Reymerswale (23 June to 23 September 2020); and one devoted to William Blake (27 October 2020 to 10 January 2021) on the Divine Comedy.

Mythological Passions, co-organised with the National Gallery, the National Galleries of Scotland in Edinburgh and the Isabella Stewart Gardner Museum in Boston, brings together for the first time since the 17th century the six mythological paintings based on classical poetry known as the “poesies”, painted by Titian for Philip II between 1551 and 1562 and which are among the most important within the artist’s output, not just for their artistic quality but also due to the way in which Titian approached the pictorial depiction of classical literary accounts.

Particular mention should be made of the exhibition that opens in October, devoted to the Carmen Sánchez García Bequest. This will display the work acquired by the Museum through the generosity of this teacher who bequeathed her estate to the Prado. The exhibition aims to pay tribute to this benefactor and to show the public a selection of the acquisitions made possible as a result of her generosity.

The innovative installation of the Dauphin’s Treasure has allowed for a new appreciation of this collection which demonstrates the richness and variety of the Prado’s holdings. It is now completed with a exhibition on the cases (18 February to 13 September 2020) that have protected and preserved these exquisite and valuable objects during wars and their transport over the centuries. Made in fine leather with blind-stamping and gilt decoration and lined in velvet or other costly fabrics, they constitute one of the best preserved and most complete collections of its type.

The Prado 200 project consists of the design and installation of a permanent display devoted to the history of the Museo Nacional del Prado. It will be located in Rooms 100, 101 and 102 of the Villanueva Building and will aim to explain key concepts to visitors, including the construction of the building, its evolution and enlargement, in addition to the characteristics of the display installations and fittings that have been used over the decades and issues relating to the evolution of the Museum’s image and everyday management through the presentation of a range of objects (non-artistic collections and items associated with the Prado), organised into various thematic sections.

Reinstallation of sculpture in the Ionic Gallery

The improvement of the display conditions and their optimum conservation and preservation are the aims behind the return to display use of the Ionic Gallery in the Villanueva Building as a new gallery for classical sculpture.