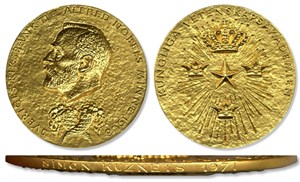 The Nobel Prize in Economic Sciences, awarded in 1971 to influential economist Simon Kuznets, inventor of the Kuznets Curve in 1955. Kuznets is credited with inventing a quantitative method for correlating per capita income to economic inequality over time, as a country's economic growth matures. In the ceremony on 11 December 1971, the Nobel Prize committee awarded Kuznets the Nobel Prize for his ''empirically founded interpretation of economic growth which has led to new and deepened insight into the economic and social structure and process of development''. 23K gold medal prominently bears the image of Alfred Nobel upon the obverse, with ''Sveriges Riksbank Till Alfred Nobels Minne 1968'' applied in raised letters, encircling the medal. ''Simon Kuznets 1971'' is engraved to the rim, and the medal's reverse contains the north star emblem of the Royal Swedish Academy of Sciences, with the phrase ''Kungliga Vetenskapsakademien'' applied. Housed in the original red leather case with Kuznet's name gilt stamped. Medal weighs 7.25 oz. and measures 2.5'' in diameter, consistent with the original Nobel Prizes awarded in 1971. Case measures 5.5'' x 5.5'' x 1''. Accompanied by a copy of the Nobel Prize speech owned and annotated by Kuznets. This is the sixth Nobel Prize ever sold at auction, and the first in the category of Economic Sciences. Presented in near fine condition. With an LOA from the consignor, Simon Kuznets' son.