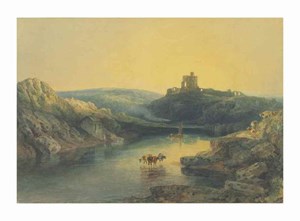 Christie's The Old Master & British Drawings & Watercolours Sale will be highlighted by three important works by Joseph Mallord William Turner, led by Norham Castle: Sunrise (estimate: £500,000-800,000). The handful of haunting and atmospheric images Turner produced of Norham Castle between 1797 and the mid-1840s remain among his most celebrated works, culminating in the late, unfinished oil painting at Tate Britain. This large watercolour was first exhibited in London at the Royal Academy in 1798, and reveals Turner’s affection for a subject that had inspired a boldly experimental response, effectively liberating him as a landscape painter. The work will be offered alongside Turner’s Colour beginning: A coastal landscape with a figure in the foreground (estimate: £150,000-200,000), a previously unrecorded colour study painted around 1822-4, and Abbotsford from the north bank of the River Tweed (estimate: £70,000-100,000), last exhibited more than 30 years ago.

Two important views of Venice depicting the Doge’s Palace and the Riva degli Schiavoni along with a view of the Giudecca in Venice with the church of San Giorgio by Francesco Guardi (estimate: £500,000-700,000 a pair) will be offered. Among Guardi’s largest drawings, these are studies for the largest known oil paintings (measuring 122 x 167 in.) by the artist, in the Rothschild collection at Waddesdon Manor, Buckinghamshire. Further highlights include a collection of early Italian drawings highlighted by Federico Zuccaro’s A flying Angel holding Christ’s robe (estimate: £50,000-80,000). The drawing documents one of the most important projects of the artist’s career, the fresco inside the cupola of Santa Maria del Fiore, Florence, which he took over after the death of Giorgio Vasari in 1574. The sale will also present the earliest known self-portrait by Sir Joshua Reynolds (estimate: £100,000-150,000), drawn around 1740 shortly after he began an apprenticeship in the studio of Thomas Hudson. On the verso, a study of Diana has been discovered, which along with the early self-portrait, offers a fascinating insight into Reynold’s artistic development as an artist.