Opening Your Eyes To The Human Flow 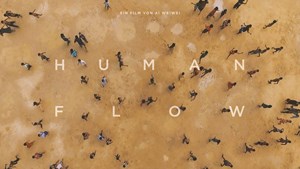 The Chinese visual artist Ai Weiwei is using art to confront people with reality. In a talk during Berlin’s International Literature Festival he spoke about the film Human Flow, his experience documenting today’s migration crisis, and how he perceives the intersection between art and activism.

The Chinese visual artist Ai Weiwei is using art to confront people with reality. In a talk during Berlin’s International Literature Festival he spoke about the film Human Flow, his experience documenting today’s migration crisis, and how he perceives the intersection between art and activism.

When Ai Weiwei chooses a topic to work on he gets really involved. “It’s my nature,” he says. In 2014 he was asked to curate a showcase of refugee artworks for Iraq’s pavilion at that year’s Venice Biennale. Three years later his documentary Human Flow hit theaters across the world.

The two-hour film shows the global scale of the current migration crisis. Weiwei and his team went to 40 camps in 23 countries and interviewed over 600 people. “It’s easy for us to follow one family and tell a nice story because this could be more narrative. But I realized this is much larger. It’s not about Syria. It’s Africa, Europe, Pakistan, Turkey…,” says the artist.

Human Flow isn’t meant as a historical account. “It’s a story told by an artist,” says Weiwei. The Chinese’s account looks to highlight refugees’ human dignity because society seems unable to see it; and to present migration not as a current state but as a human condition. “Human has been immigrating since human become human,” he says. 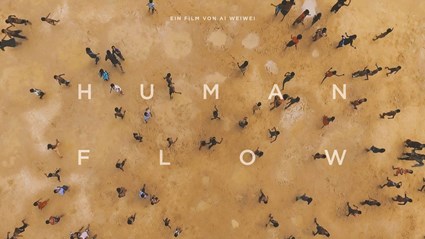 Throughout the film Weiwei quotes poems that connect the stories told on screen to humanity as a whole, and presents powerful statistics like the fact that currently over 65 million people have been forced to leave their homes to escape war, famine or the effects of climate change.

In every camp the Chinese met the same problems: human lives being wasted in a seemingly endless state of limbo. “The hardest thing in a camp is boredom. For years, not days but years, you have nothing to do,” he says. They’re just sitting there and don’t even know when it’s going to end. Nobody welcomes them. They’re being seen as if they were transparent.”

The refugee crisis is evidencing a troublesome fact: “We’ve become selfish and narrow minded,” says Weiwei. “We accept refugees as mercy which I think is totally wrong because they are part of you, part of society and of our struggle. You can see how fragile society can be when we talk about humanity.”

Weiwei doesn’t care if his work is considered art. “People have a tendency to say this is art, this is not art. I don’t care if people call me an artist or not. I’m a human being,” he says. The Chinese is using his work and world recognition to give voice to the voiceless. Sharing their ideas with the society is no easy task. People tend to push away and disregard those who differ from them. “That’s why my fight is real. You have to make an effort. You have to know about this struggle,” says Weiwei. “We’re in a critical time.”

In 2017 the artist placed over 300 security-fence installations across New York. The exhibition Good fences make good neighbors put the topic of migration on people’s front door. “But it passes like wind,” says Weiwei. “The struggle is ongoing.”

Human Flow is a call to action. “People tend to think: I’m an individual, what can I help,” he says. “I think you’re being rightly informed and as an individual you are powerful. You can make the right judgment, the right political decisions and make society start to change. Don’t underestimate anybody, including yourself.”

Wewei is currently working on several books and three films. “We have much more problems than refugees,” he says.