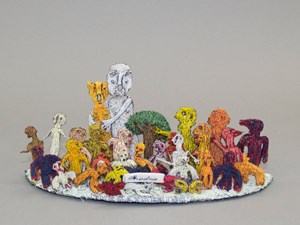 Award winning charity Outside In bring a ground-breaking exhibition to Sotheby’s this January, running until 19 January 2018.

Outside In: Journeys brings together the diverse work and stories of 34 artists involved in Outside In who have been working in the sector for over 10 years but who have just recently become a charity.

Outside In challenges traditional institutional assumptions about whose voice is most important and aims to provide a platform for artists who would struggle to get their voices heard in the arts world due to a variety of factors including health, isolation, disability or social circumstances. They are currently supporting more than 2,500 artists. The current exhibition features James Lake’s life-size cardboard runner - originally commissioned for the London 2012 Paralympic Games.

AD: What are the successes of the exhibition so far?

MS: The major success of the exhibition was the opening night. With 300 people in the space, including Outside In artists, dealers, collectors, Museum directors and funders, the atmosphere was electric. The highlight was securing Jarvis Cocker to say a few words. The interaction between the artists and guests and the hugely positive response to the quality of the work helped validate the artists and Outside In as it begins its journey as an independent charity.

AD: Why have you chosen Sotheby’s for this exhibition?

MS: We are fortunate that one of our trustees, Frances Christie, is the Senior Director and Head of Modern & Post War British Art, and offered us the space during a quiet time in their calendar. Being at the heart of the commercial art world has allowed us to make a powerful statement about us and our mission to create a fairer art world for artists facing barriers to their inclusion. It’s been lovely to see the word of mouth impact on Sotheby’s staff and visitors about the exhibition; there is a wonderful coming together of two aspects of the art world that do not often coincide. 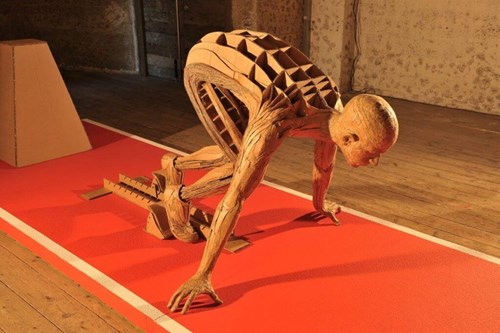 AD: How are the reactions from visitors?

MS: We have had a lot of positive feedback, including selling several pieces of work and signing up new Friends and Patrons. Visitors have been surprised at the quality and diversity of works in the exhibition and its curation, allowing the artist voice to come to the fore through the labels and catalogue.

AD: What are the future plans of Outside In?

MS: We will be hosting the European Outsider Art Association Conference In May at Pallant House Gallery on the theme of the Artist Voice and are currently offering a co-commission with the Gallery based on the works of Scottie Wilson,which will also be on display in May. We have our acclaimed touring exhibition Alternative Visions: Undiscovered Art in the South West on show at the Wilson in Cheltenham and several other exhibitions in the pipeline. Our major strategic goal is to develop a national programme of artist support through working in partnership with regional galleries and museums, which will be aided by the launch of our new website later in the year. Image on top: The Gathering, by Aradne, machine embroidery, 2015 (photo by Oana Damir)