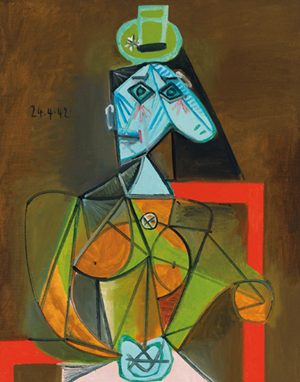 Pablo Picasso’s Femme dans un fauteuil of 1942, (Estimate on Request) will be a leading highlight of Christie’s Impressionist and Modern Art Evening Sale on 20 June 2018.

Pablo Picasso’s Femme dans un fauteuil of 1942, (Estimate on Request) will be a leading highlight of Christie’s Impressionist and Modern Art Evening Sale on 20 June 2018. One of a major series of full-scale portraits, painted during the war, Femme dans un fauteuil depicts Picasso’s great muse of the period Dora Maar, the surrealist photographer and painter. Dora brought great colour, beauty and vivacity into Picasso’s life during the difficult periods of the Spanish Civil War and the German occupation of Paris. Dora Maar’s presence in Picasso’s life, from the moment they met in 1935 until the time their relationship ended around 1945, inspired some of the greatest portraits of the artist’s prolific career.

Femme dans un fauteuil remained in the artist’s collection until his death when it passed to Jacqueline Picasso and was eventually sold through the agency of Picasso’s dealer, Galerie Louise Leiris in Paris. It is a painting that has been rarely exhibited having remained in the artist’s family for many years. It was first shown in an exhibition of Jacqueline Picasso’s collection in 1986 and has largely disappeared from public view since that time. The painting will be exhibited in Hong Kong from 25 to 28 May and in London from 15 to 20 June 2018 before its sale on 20 June at Christie’s King Street.

Among the most highly worked portraits of Dora that Picasso painted during the Second World War, Femme dans un fauteuil features the iconic distortions which dominated his visions of his raven-haired muse and is notable for its strikingly beautiful colours and the dynamic way in which Picasso has described the sitter’s body. Many of the greatest depictions of Dora of the 1940s share the vibrant colours and dynamism of the present painting and it is perhaps for this reason that it was kept in the Picasso family for so many years. What is most unusual about the work is that it has been so rarely exhibited.

Created in April 1942, Femme dans un fauteuil was executed whilst Picasso was living in occupied Paris. Although he had received offers of sanctuary from friends in the United States and Mexico at the outbreak of the conflict, Picasso chose to remain in France, living a quiet life in his studio at 7 rues des Grands-Augustins. Labelled a ‘degenerate’ artist during the Nazi campaign against modern art, the artist’s presence in the city did not go unnoticed by the German forces. While he was allowed to continue to work, Picasso was forbidden from exhibiting any of his art publicly. He remained under close and constant observation by the Gestapo, and his studio was visited on a number of occasions, during which he was questioned as to the whereabouts of friends and former colleagues now in hiding.