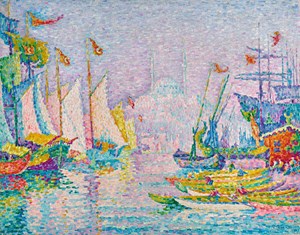 When Signac first travelled to Istanbul in the spring of 1907, he was immediately struck by both the grandeur and history of the place, and the unique quality of light and colour that filled the ancient city. As he observed in his diary: ‘There is the shrouded light of the North against the colour of the Orient. One thinks of London, of Rotterdam - and of Venice a bit. Above all, it is Turnerian’ (P. Signac quoted in P. Signac (exhibition catalogue), op. cit., 2003, p. 122).

The location inspired twelve paintings all of which take as their subject the historically significant Golden Horn, a flooded estuary of the Bosphorus near the port of Istanbul. This passage of water was one of the key entrances to the Ottoman capital at this time and a busy waterway, teeming with life. In La Corne d’Or. Matin the skyline of the city is easily recognisable in the background, with the famous minarets of the Hagia Sophia an unmistakable silhouette on the horizon. This ethereal vision, which floats in a miasma of delicate pinks and purples, is framed to either side by an array of boats and ships rendered in vibrant colours that suggest the energy and bustling activity of the modern city. The brilliant luminosity of the composition is typical of Signac’s late style and is wonderfully effective here in paying homage to the historical legacy and richness of the city whilst bringing a fresh vivacity to its portrayal. 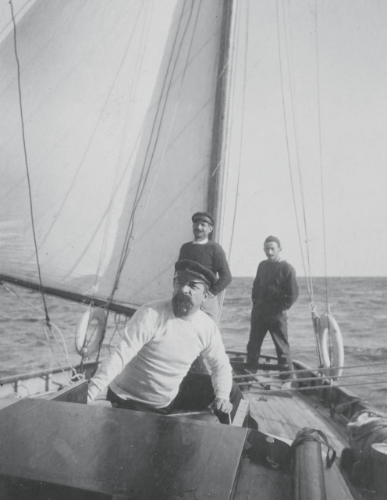 While his paintings of Istanbul date from 1907, Signac had begun travelling more extensively throughout Europe in 1904, visiting other major port cities such as Venice, Rotterdam and London. Unlike Monet, whose travels were occasioned by the search for new visual stimuli, Signac’s travels were to a certain extent programmatic in intent and the present work very much belongs within this major ‘series’ of late paintings. ‘At the turn of the century, Signac’s paintings tended toward a decorative classicism, manifested by broad, well-considered and balanced compositions. His project for a series of views of famous ports, inspired by a similar series by Joseph Vernet, was realized in unusually large-scale pictures [...]. Conscious of working within a historic tradition, Signac no longer proclaimed a modernity justified by science but alluded to his predecessors, great marine painters like Turner and Claude Lorrain who celebrated light’ (Marina Ferretti-Bocquillon in Signac (exhibition catalogue), Galeries Nationales du Grand Palais, Paris; Van Gogh Museum, Amsterdam & Metropolitan Museum of Art, New York, 2001, p. 225).

The contemporary critic and key supporter of the Neo-Impressionists, Félix Fénéon, was aware of this same alliance with historical precedents when he wrote, ‘chromatic opulence in Paul Signac’s paintings decorates deliberate, audacious and rhythmic compositions which inevitably bring to mind the names of great masters such as Poussin and Claude Lorrain’ (F. Fénéon quoted in Jean Sutter (ed.), Neo-Impressionists, Greenwich, 1970, p. 60). The artist himself wrote on this topic when he published D’Eugène Delacroix au néo-impressionnisme in 1899. Signac concentrated on the relationship between naturalistic depiction and decorative abstraction. As Michael Marlais writes: ‘he spoke of the triumph of abstraction over realism, the very underpinning of modern art. The concept of the decorative was very weighty indeed for the Neo-Impressionist painters because it separated them from all the illusionistic, realistic manners of the past. It made the Neo-Impressionists modern. Yet at the same time, it also connected them with the past’ (M. Marlais, ‘Neo-Impressionism, Puvis de Chavannes, and the Decorative Aesthetic’, in Neo-Impressionism, Artists on the Edge (exhibition catalogue), Portland Museum of Art, Portland, 2002, p. 54).

Yet, whilst Signac looked to past masters for inspiration in subject matter, these canvases also provided an arena in which he could continue to experiment with technique. When he painted the current work in 1907, Signac was further developing his artistic style beyond the strict tenets of Divisionism which he had adopted from Georges Seurat in the 1880s. He liberated his colour palette and broadened his approach while retaining the main characteristics of Divisionism through his pointed application of brushstrokes. This mature style was characterised by a subtle exploration of the nuances of light combined with a chromatic richness that is a key quality of La Corne d’Or. Matin. This work was the only view of Istanbul that Signac decided to exhibit at the 1908 Salon des Indépendants and when the critic Claude Roger-Marx first saw the painting on the walls of the salon it caused him to observe: ‘It is important to recognise that no other painter has applied the new technique with more intelligence or authority than Paul Signac. His view of the Corne d’Or, which is of the highest order, exemplifies the high intensity of luminous and chromatic expression that Neo-Impressionism can reach’ (C. Roger-Marx, op. cit., p. 117, translated from French). 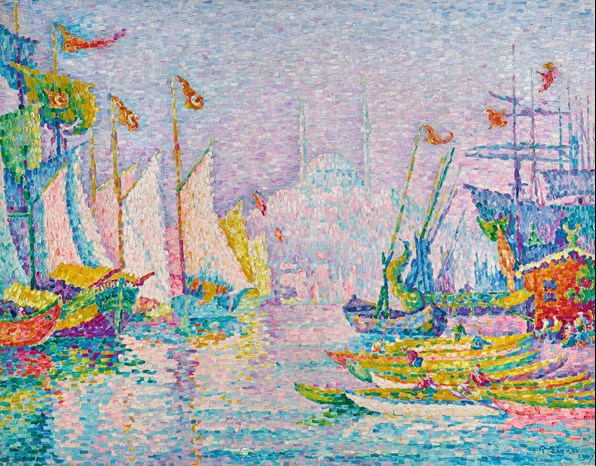