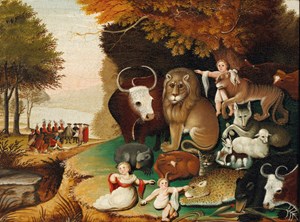 Fully developed and optimistic, this Peaceable Kingdom is a particularly powerful rendition of Edward Hicks’ famous series. Hicks’ repetition of the same scene was a deeply personal undertaking, almost an act of faith, rather than a source of income and as such, the variations seen among these iconic works reflect the changing state of Hicks’ world, his Quaker community and his own mind.

Isaiah 11:6-9
The wolf also shall dwell with the lamb, and the leopard shall lie down with the kid; and the calf and the young lion and the fatling together; and a little child shall lead them.
And the cow and the bear shall feed; their young ones shall lie down together: and the lion shall eat straw like the ox.
And the sucking child shall play on the hole of the asp, and the weaned child shall put his hand on the cockatrice' den.
They shall not hurt nor destroy in all my holy mountain: for the earth shall be full of the knowledge of the Lord, as the waters cover the sea.

Fully developed and optimistic, this Peaceable Kingdom is a particularly powerful rendition of Edward Hicks’ famous series. Hicks’ repetition of the same scene was a deeply personal undertaking, almost an act of faith, rather than a source of income and as such, the variations seen among these iconic works reflect the changing state of Hicks’ world, his Quaker community and his own mind. Sanguine and abundant, the animals in this work evoke a positive world, one where the prophecy of Isaiah (see above) has come to pass and traditional foes have put aside their differences to live in harmony. This canvas exemplifies Hicks’ Middle Kingdom works from the 1830s, after the more tentative early years, before the weariness of his old age and when hope reigned supreme. Here, Hicks has found a successful, balanced composition that evokes this outlook. Within Hicks’ series, the closest parallel to the example offered here is the Peaceable Kingdom formerly in the Garbisch Collection and now in the collection of the National Gallery of Art (fig. 1). Both display a large number of animals—fourteen in the work offered here and fifteen in fig. 1—and they are similarly arranged tightly encircling the central lion. They are also the only two within the entire series to feature the enduring scene in the foreground with an angel reaching out to caress the nose of a supplicant leopard. The presence of a female lion, which appears in most Middle Kingdom iterations, has been associated with Hicks’ concern with family and motherhood. Hicks’ own mother died when he was only one year old, an event that would have had a profound effect throughout his whole life. Furthermore, women were afforded significant status within the Quaker ministry, so the inclusion of this second lion reveals the priorities of his immediate community.

Middle Kingdom versions also contain a scene depicting the signing of Penn’s Treaty in the background, which further balances the composition. In 1683, William Penn negotiated a peace treaty with the local Lenape tribespeople and as a demonstrable instance of peace and harmony, this historical subject struck at the core of Hicks’ beliefs. This event is also placed on ground that is separated by a chasm-like divide from the foreground with the animals. Such a visual break in the overall picture probably refers to discord between the Hicksite and Orthodox Quakers, a conflict that culminated in the great schism of 1827. Few survivals of the Middle Kingdom subgroup remain in private hands and in addition to the painting in fig. 1, similar examples are in the collections of the Worcester Art Museum, Abby Aldrich Rockefeller Folk Art Center, Pennsylvania Academy of Fine Art and Brooklyn Museum of Art.

In articulating his religious and personal beliefs through the strokes of his paintbrush, Hicks created a masterful body of works that attest to his enduring legacy.

In the original black painted and gilded pine frame; the reverse with label with transcription of Isaiah 11:6-9
oil on canvas
17 ½ x 23 ½ in.
Painted circa 1833