Pieter Brueghel the Younger’s Return from the Kermesse 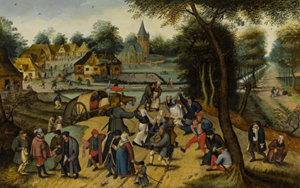 Sotheby’s Old Masters Evening sale in London on 7 December will present collectors with a rich selection of Italian Renaissance masterworks and Dutch and Flemish paintings from the Golden Age.

Early Italian paintings and Flemish masterworks have become two of the most desirable areas in the Old Masters market, often finding their way into wide-ranging collections, often alongside Contemporary Art. Sotheby’s Old Masters Evening sale in London on 7 December will present collectors with a rich selection of Italian Renaissance masterworks and Dutch and Flemish paintings from the Golden Age, many of which have remained in prestigious European private collections for centuries. Among these works are two exceptional early Italian Renaissance portraits: one by Titian and his studio, another by an artist rarely seen at auction, Lorenzo Lotto. These feature alongside a magnificent flower still life by Ambrosius Bosschaert the Elder and two magnificent Italian 15th century gold-grounds, unseen on the market for over 100 years. The sale also includes a section entirely dedicated to the Dutch and Flemish painters influenced by Pieter Brueghel the Elder, led by one of the finest known versions of Pieter Brueghel the Younger’s most popular compositions: a more-than-merry procession of villagers returning from a village fête.

The highlight of this section is one of the finest known versions of Pieter Brueghel the Younger’s Return from the Kermesse, a composition that enjoyed great popularity during the artist’s lifetime and which appears to have been entirely of his own design. Its beautiful state of preservation allows us to fully appreciate the superb draughtsmanship, understanding of gesture, colour, composition and story-telling that have ensured for Brueghel a lasting reputation (est. £2-3 million).