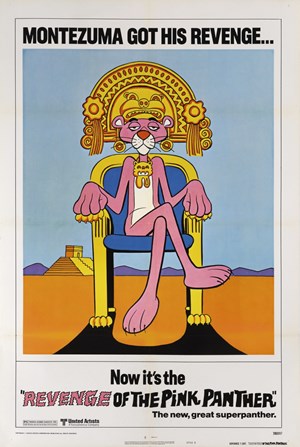 Original Film Posters Online returns with an exceptional variety of titles including Cinématographe Lumière, the inaugural poster designed for the first ever public screening of a film in 1896.

Original Film Posters Online returns with an exceptional variety of titles including Cinématographe Lumière, the inaugural poster designed for the first ever public screening of a film in 1896. The sale features a strong James Bond section as well as sci-fi giants including Star Wars, Forbidden Planet and King Kong. The exhibition is on view in our London galleries throughout the month of August.

The Pink Panther is a fictional animated character who appeared in the opening and/or closing credit sequences of every film in the Pink Panther series except for A Shot in the Dark and Inspector Clouseau. In the storyline of the original film, "the Pink Panther" was the name of a valuable pink diamond named for a flaw that showed a "figure of a springing panther" when held up to the light in a certain way; in the credits this was translated to an animated pink panther.

The character's popularity spawned a spin-off franchise of theatrical shorts, television cartoons and merchandise. He starred in 124 short films, 10 TV shows and 4 TV specials. The character is closely associated with "The Pink Panther Theme", composed by Henry Mancini.

This was the sixth film in the popular Pink Panther comedy series, and was the last on-set performance released during the lifetime of Peter Sellers.