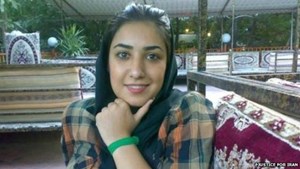 Amnesty International is an organisation dedicated to investigating and eradicating human rights abuses. The organisation’s work is carried out by people who, as they describe themselves, take injustice personally. Their mission is to campaign for a world where human rights are followed and enjoyed by all. Artdependence Magazine talked with Raha Bahreini, Researcher with the Iran Team of Amnesty International, about the situation that Atena Farghadani, painter and activist, who was sentenced on 1 June 2015 to 12 years and nine months in prison, is now facing.

Amnesty International is an organisation dedicated to investigating and eradicating human rights abuses. The organisation’s work is carried out by people who, as they describe themselves, take injustice personally. Their mission is to campaign for a world where human rights are followed and enjoyed by all. In their fight against the worldwide abuses of human rights, Amnesty international first of all makes the human right violation cases public, bringing attention to political and social injustices and serving as a mediator between the victims of abuses and those who are in the capacity to demand that rights be abided.

Amnesty International was founded in 1961 by British lawyer Peter Benenson (1921 – 2005). It all started with a newspaper article, which stated that two Portuguese students were sentenced to seven years in prison for making a toast for freedom during the authoritarian Estado Novo regime lead by Antonio de Oliveira Salazar. Peter Benenson wrote his own article “The forgotten prisoners” and sent it to The Observer; in the article he asked readers to write letters showing support for these two students. The article created a furor and was reprinted in newspapers all over the world, provoking an unexpected reaction from readers to draw more attention to human rights violation cases.  Within a year groups of supporters had formed in several countries. At the moment, Amnesty International counts with 7 million people as followers and supporters, and continues to campaign in order to help fight abuses of human rights worldwide.

Among the many cases of human rights abuses, our attention was drawn to that of Atena Farghadani, a 29-year-old painter and activist who was sentenced on 1 June 2015 to 12 years and nine months in prison, on charges of “gathering and colluding against national security”, “insulting members of parliament through paintings”, “spreading propaganda against the system”, “insulting the President” and “insulting the Iranian Supreme Leader”. The charges stem from her involvement in political yet peaceful activities, including her association with families of political prisoners, her anti-government posts on Facebook and her artwork. In 2014 she created a cartoon criticising a draft law which would restrict access to birth control, which depicted the Iran’s Supreme Leader and members of parliament with animal heads. She was first arrested in 2014 and kept in detention for 4 months. In January 2015, after posting a video online in which she described how she was ill-treated in prison, she was arrested for the second time.  Atena Farghadani’s sentencing follows an unfair trial before Branch 15 of the Revolutionary Court in Tehran that lasted less than half a day. It relied on evidence from lengthy interrogations that had been conducted when Atena Farghadani was held in solitary confinement in Evin Prison, without access to her family or legal defense. Atena Farghadani did recently manage to file an appeal, however, if her appeal is rejected she will serve seven-and-a-half years in jail on the most serious charge, "gathering and colluding against national security".

Artdependence Magazine talked with Raha Bahreini, Researcher with the Iran Team of Amnesty International, about the situation that Atena Farghadani is now facing. 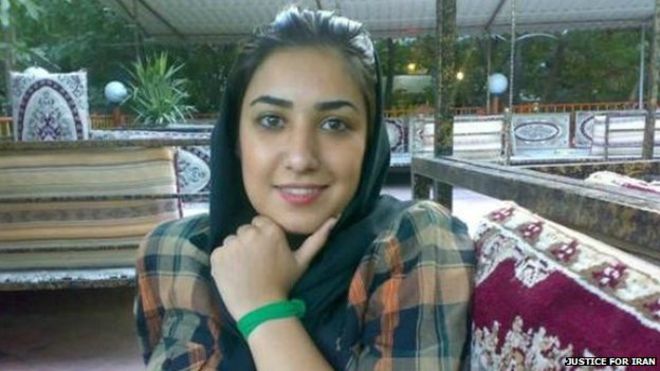 Artdependence Magazine: What is actually happening now with regards to Atena Farghadani? Has she managed to file an appeal?

Raha Bahreini: She lodged the appeal and is still waiting for the result. It is not clear when the court of appeal will give its decision but she managed to submit this appeal even though she was arrested and detained.

AD: According to information provided by Amnesty International, Atena Farghadani started a “wet” hunger strike (taking water but not food) on 9 February in protest at her continued detention in Gharchak Prison. She apparently suffered a heart attack on 25 February and briefly lost consciousness as a result of her hunger strike. She was hospitalized outside the prison and ended her strike. On 3 March, she was transferred from the hospital to Section 2A of Evin Prison, where she spent another 11 weeks in solitary confinement. Since the issuance of her sentence on 1 June, she has been transferred to the General Ward of Evin Prison. What is her health condition at the moment?

RB: Atena was on hunger strike for three days the week commencing 7 September 2015 to protest the verbal abuse, including sexual slurs and insults, that prison officials and guards have perpetrated against her since July 2015 when her male lawyer was arrested for shaking hands with her following a meeting in prison.  Atena is under a great deal of psychological pressure as a result of this.

We understand that Atena is being taken to hospital for regular check-ups; however, it appears that prison guards are using the time it takes to transport her to/from the hospital to verbally abuse her, and as a result, these journeys have become a source of stress for Atena.

AD: In your opinion, does this case get enough international attention?

RB: Yes, this case attracted lots of international attention and we hope that authorities will get the message that she should be released immediately and unconditionally. Pending this, the authorities must ensure that Atena is not subject to ill-treatment and has access to her lawyer.

AD: Are there any other activists imprisoned in Evin for voicing their opinion?

RB: Yes, there are a number of such activists.  They include  Atena Daemi, a 27-year-old anti-death penalty and civil society activist, was sentenced to 14 years in prison on 12 May after a grossly unfair trial. The trial apparently lasted no more than 15 minutes and took place at the same time as the trial of three others. She was convicted of “gathering and colluding against national security”, “spreading propaganda against the system”, “insulting the founder of the Islamic Republic of Iran and the Supreme Leader” and concealing evidence. The charges stem from her criticism on Facebook and Twitter of executions and human rights violations in Iran, as well as her participation in gatherings outside prison in solidarity with families of death row prisoners, in addition to distributing  anti-death penalty pamphlets, and her association with human rights defenders and the families of those killed during the crackdown that followed the 2009 election. In August 2015, she suffered from fatigue and headaches. After weeks of delays in which she was not provided with medical care, on 14 September, she was taken to a hospital outside of Evin Prison for diagnostic testing. The results have reportedly indicated that her ill-health results from the psychological stresses associated with her imprisonment.

Also, Mohammad Ali Taheri received a death sentence on 1 August 2015  for “spreading corruption on earth” (efsad-e fel arz) by establishing a new spiritual group called Erfan-e Halgheh. He had been tried before Branch 26 of the Revolutionary Court in two sessions, on 11 March and 29 April. He has been on a hunger strike since 13 August 2015 in protest at the refusal of the authorities to allow him properly prepare his appeal to the Supreme Court. He has been only allowed to meet his lawyer once for 20 minutes. The authorities have further denied him a pen and paper to write in his defence.

We understand that Mohammad Ali Taheri’s death sentence for the charge of “spreading corruption on earth” is based on the same spiritual teachings and practices which were relied upon in October 2011 to convict him of several offences, including “insulting Islamic sanctities”, and sentence him to five years’ imprisonment, 74 lashes and a fine of nine billion rials (US$300,000).

Mohammad Ali Taheri has been since serving this prison sentence in solitary confinement in Section 2A of Tehran’s Evin Prison, which is run by the Revolutionary Guards. Amnesty International is very concerned that the death sentence for the charge of “spreading corruption on earth” has come as a result of pressure from the Revolutionary Guards, which raises alarms about the judiciary’s independence and impartiality in Iran.

Mohammad Ali Taheri introduced the spiritual doctrine of Erfan-e Halgheh after 13 years of receiving what he claims were “spiritual inspirations” that empowered him to connect with a larger “Cosmic Consciousness”. He lawfully opened a cultural and educational institute, also called Erfan-e Halgheh, in Tehran in 2006 to develop and disseminate his newly found spiritual beliefs, and practice them with his followers in “healing sessions”, apparently focused on alternative non-medicinal treatments.

Human rights defender Narges Mohammadi was arrested in her home on the morning of 5 May after security forces threatened to break down her front door if she did not open it. She was subsequently taken to Tehran’s Evin Prison. Her trial is set to begin on 7 October and she will face charges that include:  “spreading propaganda against the system” and “assembly and collusion against national security.” Before her arrest, Narges Mohammadi told Amnesty International that the charges against her stem solely from her peaceful human rights activism. She stated that this included giving media interviews, gathering outside prisons prior to executions to support the families of death row prisoners, her connections with other human rights activists, such as Nobel Peace Prize Laureate Shirin Ebadi, and her March 2014 meeting with Catherine Ashton, the then EU High Representative for Foreign Affairs and Security Policy. Narges Mohammadi’s lawyers were not allowed to see her casefile before the start of her trial.

She is also being denied the specialized medical care she requires as the Iranian authorities have not given permission for her to be transferred to a hospital for medical care, though this has been recommended by her neurologists.

Do not stay indifferent to what is going on in the world with human rights abuse, find out more with Amnesty International.