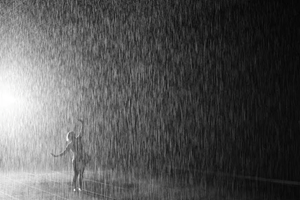 Following the weekend of the November 13th Paris tragedy I was looking to escape my sadness through an immersion into art and its transformational powers. I thought I might find this by visiting the Los Angeles County Museum of Art (LACMA) to see Random International’s Rain Room exhibition.

Following the weekend of the November 13th Paris tragedy I was looking to escape my sadness through an immersion into art and its transformational powers. I thought I might find this by visiting the Los Angeles County Museum of Art (LACMA) to see Random International’s Rain Room exhibition.

In promotional materials for the exhibition I had seen a gorgeous downpour of rain falling in a darkened space. Supposedly, one was to walk slowly through continuously falling water while the detection of the human body would cause the rain to miraculously stop. This would create an individual pocket, within which one could reflect upon the cacophonous volume all around. I was looking forward to witnessing this beauty in silence and appreciating the metaphor of stepping outside normal, chaotic, everyday life into an inner sense of peace that society consistently roams farther away from. I thought it might be the perfect antidote to the shadow side of human nature preoccupying my mind, but instead it further validated some uncomfortable truth about modern day humanity.

I arrived at my pre-reserved time and lined up with fifteen other people as we listened in anticipation to the rushing downpour that took place in the room just beyond the cordoned ropes. Before being led into the room, we were told that sixteen of us would be let in at once. Only eight of us would be allowed to walk into the massive square of falling water at a time and we would have to figure it out on our own. We were told to be considerate of each other and spend no more than two minutes in the water at a time. We would be given fifteen minutes total to enjoy the experience. We were not asked to be silent, as in many other installations, but were encouraged to snap photos.

What ensued was dismal. Our group of chatty people, armed with smartphones, entered. The breathtakingly undisturbed rain fell in the blackened room with one large spotlight cutting shafts of brightness throughout, splintering the space into illuminated sparkles. I stepped in, yearning for a sense of meditation and solitude. Instead, people stepped into the water all at once looking for the best photo opportunity positions and talked amongst themselves. The rain stopped around me but because eight people at once was a lot of bodies in ratio to the exhibition’s square footage, the water also disappeared almost completely. Most people snapped selfies or turned on their video cameras. I wasn’t sure exactly what they were capturing amongst the dwindling water other than another portrait of themselves to share on their various social media feeds. Perhaps some of them would opt for the red, white and blue filter on Facebook to turn their profile pictures into a token of solidarity for France. 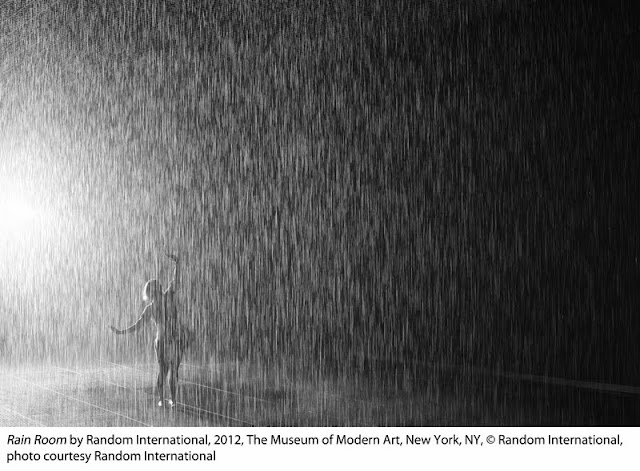 I stepped out of the artwork and stood on the perimeter of the installation to watch the spectacle as an overzealous docent, much akin to an old time carnival barker, ordered visitors to give others a chance at the rain and to not be afraid to get wet.

Determined to find something meaningful, I took the opportunity to read a handout while waiting. It described the way 528 gallons of water were continuously being recycled through the room so as not to waste precious water in a time of great California drought. I thought about the upcoming climate change conference in Paris and how it had become all but overshadowed by the horrific acts of ego-driven evil that had taken place the weekend before. I thought about LACMA’s odd management of an exhibition that surely was supposed to be enjoyed with complete presence and contemplation. I thought about Los Angeles Times’ art critic Christopher Knight’s review of Rain Room a few weeks before, in which he stated it was not art at all, but merely a toy. I waited for my fellow patrons to stop playing with this toy that had become just another distractive and vain means to overlook opportunities at discovering life’s preciousness. I then exited the museum and drove home to grieve in isolation.

Rain Room is on view at LACMA through March 6, 2016. Visitors need to plan ahead. On top of the regular admittance fee to the museum, there is an extra $15 ticket for the exhibition, which needs to be reserved in advance. Read more about the exhibition here.

By Kimberly Nichols
Kimberly Nichols is an artist, writer, and social anthropologist in Los Angeles, California. Her conceptual works, literary fiction and creative nonfiction have been exhibited and published internationally. She is the author of the critically acclaimed collection of short stories Mad Anatomy (Del Sol Press, 2005) and is currently writing a second book.