The powerful paintings of Richard Phillips go far beyond art systems and the representational function of their medium.

The powerful paintings of Richard Phillips go far beyond art systems and the representational function of their medium.

The powerful paintings of Richard Phillips go far beyond art systems and the representational function of their medium. Charged with authenticity, they are much larger than life, full of honest adoration and able to uncover the light, natural humanity behind the work of heavy media curtains. Revealing human beings in a traditional method of painting, Phillips’ subjects also function as objects in total freedom from their physical reality. Through creative imagination, psychology and a fervent sense of intimacy, he illustrates an intensification of time, often with a 70’s look and the inconsistency of stardom in everyday life. Phillips’ Most Wanted series was inspired by Andy Warhol covers for Interview Magazine, which reflect much more existence than inventiveness.

Eschewing undesired access to privacy, the viewer is eyed as critically as the media in its curiosity and desire to touch and hold. This wisdom of the painter finds orientation in a deeper level of reality and brings forth a truly humane closeness without mechanical space in between. From this follows that even if we do not identify with the object, the pure feeling of being extemporaneous brings everything anticipated. Within the framework of a debate and appreciation of the mass media, Phillips is repeatedly questioning both relevance and quality. The power of pictorial eroticism serves here as a tool and non-verbal communication tactic based on the breakdown of realities and interests behind living.

The works’ expressions of personality provide self-realized, media-projected images to have a detection of primary truths in their representation of subjects. Without a given context, they stay secretive and mystical. In this way, painted emotions between art and fame confront the viewer with an open media mask that shows its very nature: skin itself, finely nuanced and shaded, conveying deep feelings, doubt or fear, directly and clearly articulated. These living tableaus are most vibrant through the painter’s touch which creates their greatest inherent value. Phillips’ new black and white, distinctively monochrome portraits are significant in their reverberation of political participation and personal time as power. They fascinate through color gradation, subtly lighter hues and exact adjustment with a gentle, elevated vantage point. Silent, clean, captivating, unaffected but somehow aggrieved, accepting and simultaneously irresistibly outspoken, they suggest sensible and receptive truths that refer to their unspoken ground of celestial beauty.

Phillips’ paintings create a realistic, towering scale of uncontrollable, quiet power not owned by any system. Consequently, he envisions an oversight framework within the reflection of inner media mirroring. This proves his premium language, drawing in a metaphorical way. Phillips’ styling leads to an elegant artifice of its own and achieves the magnetic converse of advertising, peacefully extricated and resolved. Whether he depicts singers, actors, politicians or models, his impact is the breakthrough of cutting elements between being and appearance. Longing for realism and authenticity, he offers a separate stage, unexplored private arenas, unfeigned epic realms of freedom and intimate naturalism.

Apposite, meticulous and carefully-shaped, Phillips’ paintings hold a pulsating potential, strong complexity and feminine essence that creates a common empathy fostered by his subjects. Looking deeply into their beauty and tenderness, behind the apathy of commerce and the art system, Phillips recognizes experience through realization. He recaptures the subjects’ sensitivity and qualities disrupted by media portrayal with an invulnerable faculty, a sensitivity of which they may be unaware, that is mainly a vivid, personal expression. The delicacy of feeling now engaged and protected by the artist remains through the spellbinding talent that unfolds in Phillips’ paintings. 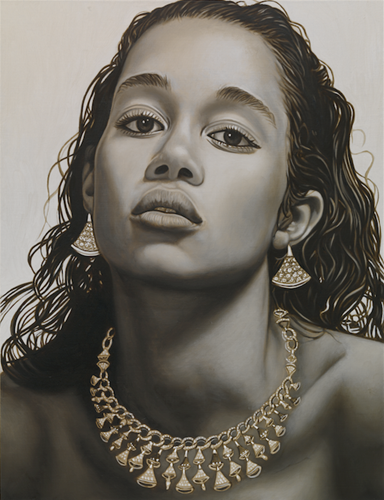 Richard Phillips’ style is peerless in its precision and technical demarcation. His mastery, keen eye, intellect and emotional insight bring out the natural beauty in the subjects he chooses, differing greatly from the glossy, empty surface of media advertising. His delving process scrutinizes shallow strategies and emphasizes the reflection of personal content infused with the shadows and light of the past. With superior qualities, Phillips’ new monochromes evidence color contrast, celebrated expressiveness and vibrant emotions in the foreground, poetically expressing faces of lived or introverted feminine vulnerabilities. Binding together differences, bright and dark, close and disparate, light and heavy, this painted language refers to iconic looks. In the final stage, it is more love without knowing than the pain of tears if life has changed the eyes or hearts of the painter’s tender, visible objects. This great immediacy and gentility demonstrates Richard Phillips’ talent for personal creation and provides each work with its own characteristic originality and eminence. By Verena Johannsmann
While thinking about advancement of her theses and post doc research in Avantgarde Performance-Art, Dr. Verena Johannsmann worked for Art Basel on Curatorial Design (between Miami Beach and Hong Kong) in the last months. Before then, she assisted temporarily with the preparation for the Honolulu Biennale Foundation and its Prologue Exhibition in Hawaii while she was finishing her PhD thesis in Europe. Verena Johannsmann currently works and lives in Berlin and feels at home in research activities in international libraries (including the Lincoln Centre for the Performing Arts), artists’ archives and private collections (Paul Rosenberg Collection, New York). Verena worked in several museum environments like the Museum of Modern Art in New York. As a Trainee, she assisted Klaus Biesenbach in the Media and Performance-Art Department and Michelle Elligott in the Archives of the Museum. Besides press work, corresponding with high profile individuals and international artists (such as Marina Abramovic, Tehching Hsieh), Verena assisted with the preparation and implementation of two major exhibition projects. To that, Verena also worked in several auctioning environments while she was studying and finishing her PhD.