Relatives Contact the Stedelijk: The Full Story Revealed Behind the Painting Working-Class Woman by Charley Toorop 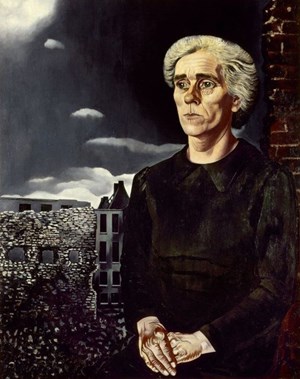 It is one of the most popular artworks in Stedelijk Base: the painting Working-Class Woman (1942-43) by Charley Toorop. On the right, in front of a crumbling wall sits a woman, gazing straight ahead, her hands in her lap, a menacing sky and charred buildings in the background. But the Stedelijk knew very little about who the identity of the woman in the portrait.

It is one of the most popular artworks in Stedelijk Base: the painting Working-Class Woman (1942-43) by Charley Toorop. On the right, in front of a crumbling wall sits a woman, gazing straight ahead, her hands in her lap, a menacing sky and charred buildings in the background. But the Stedelijk knew very little about who the identity of the woman in the portrait. 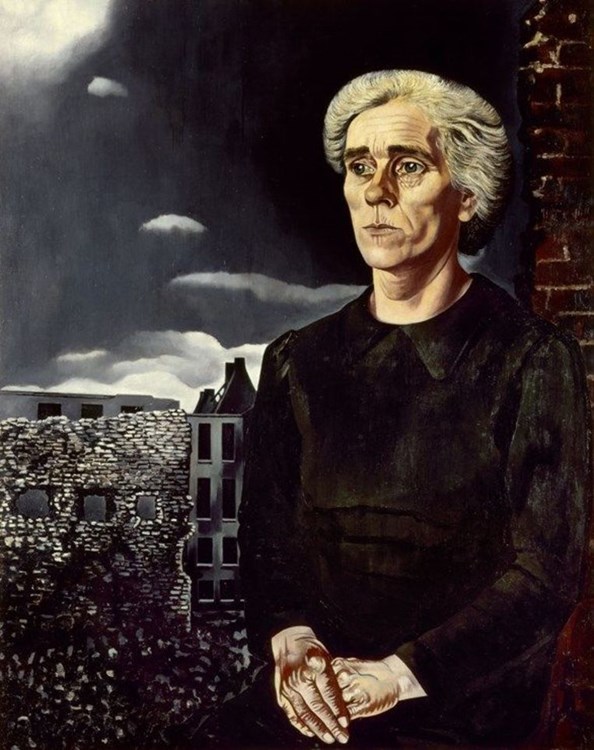 In her letters, Charley Toorop had described her sitter as ‘a working-class woman’ and called her ‘Mother Punt’. But who exactly was Mrs Punt, and why did she look so sad ….? The museum was completely in the dark. More came to light when a journalist from the Dutch Newspaper Noord-Hollands Dagblad mistakenly identified her as Trijntje Klomp-Zult. Mrs Punt’s relatives responded—they knew her true identity—the woman in the picture was their grandmother. The family contacted the museum and we discovered the full story.

The woman in the portrait is Johann ‘Jansje’ Punt (Halsteren 1899-Bergen, NH, 1983), who was Charley Toorop’s housekeeper. She is the working-class woman Toorop refers to in her letter. Mrs Punt-Verburgt was an excellent cook whose culinary delights were enjoyed not only by Charley Toorop but artists like Gerrit Rietveld too—well-known artistic figures often attended dinner parties at Charley Toorop’s home.

On the back of the painting in Charley Toorop’s handwriting, are the words: Working-Class Woman – Bergen – Charley Toorop. Charley Toorop and Jansje Punt lived in Bergen but Toorop decided to depict the devastation of Rotterdam in the background—she was very distressed when the city was bombed. As a reference, she used photos of the ruined city taken by her good friend and daughter-in-law Eva Besnyö.

“Our family knew that grandma had worked for Charley Toorop and that she’d sat for this painting. Charley Toorop gave her a photo of the work as a gift, with a photo of Charley herself on the back, as a thank you for being her model. The photo has always been in the family. But we had no idea that it is such a large canvas, the photo is much smaller, and when we saw the portrait, we were amazed. We’re so proud that this painting of our grandmother is one of the icons at the Stedelijk.” 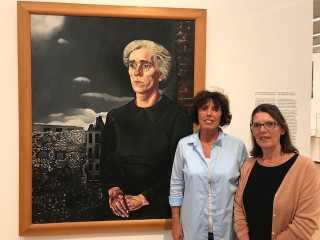 She also reveals another, very poignant reason why her grandmother looks so sad:

“Her three sons had been forced to work in Nazi Germany, and she feared for their lives. Charley Toorop captured her heartbreak in this portrait perfectly.”

“In the light of the history of World War II in the Netherlands, it is an iconic work. And it means a lot to us to have finally discovered more about the story behind the work. Despite the harrowing circumstances, Charley Toorop gives her Working-Class Woman something heroic. She has an air of acceptance but isn’t defeated, and sits erect, her gaze troubled but steadfast. The embodiment of spiritual and moral strength in a ruined world.”

Working-Class Woman was featured in the exhibition Kunst in vrijheid at the Rijksmuseum in 1945. The Stedelijk Museum bought the painting in 1952 and loaned it for display at the Venice Biennale in 1954.