Painted in 1937, René Magritte’s ‘Le Principe du plaisir (The Pleasure Principle)’ is an entrancing portrait that depicts Edward James, one of the most influential patrons of Surrealist art, who was introduced to Magritte by Salvador Dalí in 1937.

Painted in 1937, René Magritte’s ‘Le Principe du plaisir (The Pleasure Principle)’ is an entrancing portrait that depicts Edward James, one of the most influential patrons of Surrealist art, who was introduced to Magritte by Salvador Dalí in 1937. Commissioned directly by James, the present portrait was rendered from a photograph of the patron that was taken according to the artist’s specifications by fellow Surrealist, Man Ray. Magritte envisioned the concept for the present work before ever meeting James – in 1936, the artist included an ink sketch resembling the oil on the first page of a hand-made book honoring the Surrealist poet, Paul Éluard. A highlight of Sotheby's Impressionist & Modern Art Evening Sale on 12 November, this mesmerizing work is now on view in Sotheby's New York galleries.

Le Principe du plaisir (The Pleasure Principle), painted in 1937, showcases several enduring and recognizable themes from Magritte’s oeuvre: visual and cerebral paradox, an uncanny alteration of the familiar and the tension between the visible and the hidden. The painting is a portrait of Edward James, an English heir to an American railroad fortune turned eccentric poet and influential patron of Surrealist art. After Dalí introduced James to Magritte in 1937, James immediately invited the artist to spend the winter months at his Wimpole Street house in London, and for two years James commissioned a number of paintings from the burgeoning Surrealist. Of these commissions, two are portraits of the patron: La Reproduction interdite (Not To Be Reproduced) and the present work.

Magritte envisioned the concept for Le Principe du plaisir before ever meeting James. In 1936 Magritte included an ink sketch resembling the present work on the first page of a hand-made book honoring the surrealist poet, Paul Éluard. Beneath the drawing, Magritte writes “pour Paul Éluard (Idée de Paul Colinet)." This inscription may refer to Marcel Mariën’s claim that Paul Colinet submitted the idea for portrait manqué (failed portrait), or a portrait with an invisible or hidden face, to Magritte, albeit after the artist had been obscuring the likeness of his subjects for nearly a decade.

Then, in June 1937, several months after his stay at James’ Wimpole Street home, Magritte presented the idea of this portrait in a letter to James: “I have done a picture representing a man whose head is a light…I consider it as a preliminary study, the real picture as I envision is still to be painted but since it would be intended for you, do you not think your person could be recognized in it as well? If the idea appeals to you, all you have to do is be photographed full-faced at a table with your arms crossed and resting on the table and a sort of stone lying on the table to your right and not too far from your arm. And send me the photograph” (quoted in D. Sylvester, ed., René Magritte Catalogue Raisonné, op. cit., pp. 249-50). James commissioned fellow surrealist Man Ray to take his photograph, which he quickly mailed to Magritte for the portrait. When Magritte finished the painting in September and had it delivered to James in London, James told Magritte in a letter, “My friend and I think it is a great success, in fact a work of genius” (quoted in ibid., p. 250). 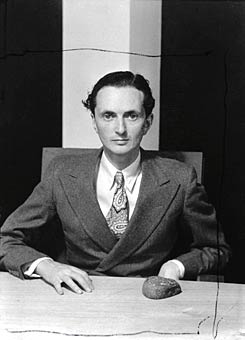 Man Ray, Edward James, "Portrait of a man sitting with a hand on the table", 1937

Le Principe du plaisir exemplifies Magritte’s interest with what is hidden in our visual reality. Throughout his career, Magritte employs surrealist imagery that confronts our fascination with the hidden—hidden faces in particular. An apple conceals the face of his iconic bowler hat man in Le Fils de l'homme while white clothes cover the faces of his subject in Les Amants. In one of his few recorded interviews (Magritte detested publicity and discussions of his own work), Magritte relates that, “Everything we see hides another thing; we always want to see what is hidden by what we see. There is an interest in that which is hidden and which the visible doesn’t show us. This interest can take the form of a quite intense feeling, a sort of conflict, one might say between the visible that is hidden and the visible that is apparent” (quoted in D. Sylvester, Magritte: The Silence of the World, 1992, New York, p. 24). Magritte achieves this conflict in Le Principe du plaisirwith a characteristic twist of paradox: we expect, and need, light to reveal, not conceal, the subject’s face in an otherwise dark room, just as we expect the mirror to reveal, not conceal, the subject’s face in La Reproduction interdite. 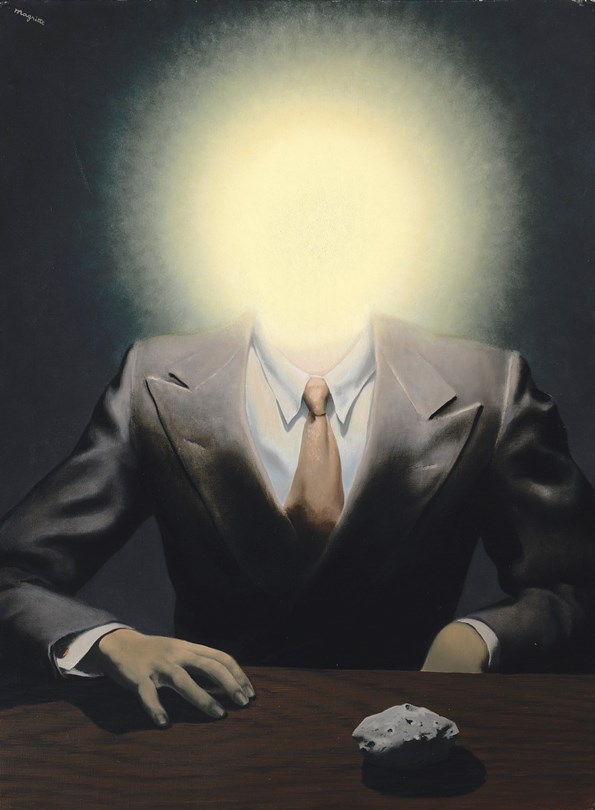 The title of the painting refers to a key element of Freudian psychoanalysis, which served as a philosophical underpinning for the Surrealist movement. However, Magritte himself has warned against interpretations and analysis of his titles: “The titles of pictures are not explanations and pictures are not illustrations of titles. The relationship between title and picture is poetic, that is, it only catches some of the object’s characteristics of which we are usually unconscious, but which we sometimes intuit, when extraordinary events take place which logic has not yet managed to elucidate” (quoted in J. Levy, ed., René Magritte: Selected Writings, Minneapolis, 2016, p. 112).

Edward James, a poet and a lifelong collector of art, is particularly remembered for his patronage of Surrealist painters including Dalí, Margritte, Tchelitchew, Fini and Carrington. He provided space for his artist friends to develop their creative practice. Dalí, Tchelitchew, Magritte and others were given studio space during extended stays in Edward's homes at West Dean and in London. He supported them further through commissions and collaborations, building one of the finest collections of Surrealist art in the world. Le Principe du plaisir remained in James' collection until 1964 when it became a part of his eponymous Foundation. It was acquired by the present owner in 1979 and has remained in the same private collection for nearly forty years.