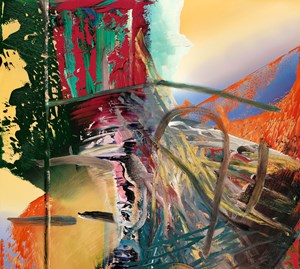 “I want to end up with a picture that I haven’t planned. This method of arbitrary choice, chance, inspiration and destruction may produce a specific type of picture, but it never produces a predetermined picture…I just want to get something more interesting out of it than those things I can think out for myself.” Gerhard Richter

“I want to end up with a picture that I haven’t planned. This method of arbitrary choice, chance, inspiration and destruction may produce a specific type of picture, but it never produces a predetermined picture…I just want to get something more interesting out of it than those things I can think out for myself.”
Gerhard Richter

Chance, layering, chromatic power and compositional counterpoint are wielded to sublime effect in Abstraktes Bild. This work dates from a pivotal year within Gerhard Richter’s oeuvre: 1986 marked the moment when the artist relinquished any planned compositional elements of form and structure in favor of the more indeterminate scrape and accretion of the ‘squeegee.’ As laid down in the present work across seemingly photographic layers of pearlescent underpainting. Richter has waged a battle between the squeegee and the brush. Across the rest of the canvas, Richter deftly commands the paint into different milieus. In the corners, the effect of the squeegee renders staccatoed ensembles in which Richter exposes the chromatic underpainting. Meanwhile, in the center of Abstraktes Bild, the artist punctuates the composition with wide swaths of brushstrokes, lending a thick impasto. Vertical stripes of paint enhance the dimensionality of the work. The result of all of Richter’s masterful maneuvering is a mesmerizing field in which painterly elements both spar against and compliment each other while the paint’s chromatic value injects the piece with an undisputed brilliance. The balance between hard and soft, structural solidity and phosphorescence, photographic and the abstract, finds an apex in this enveloping work. 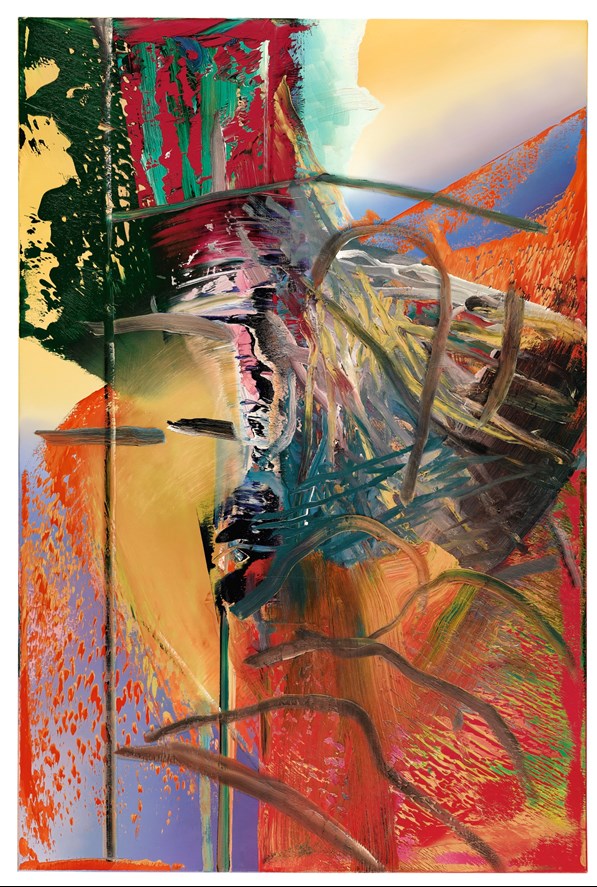 Texture, color and structure are deployed in Abstraktes Bild with spectacular force and sensitivity to engender a seductive painterly synthesis visually aligned to an exquisite and strikingly atmospheric evocation: structural strips and impastoed ridges of thick oil paint delineate a schema of painterly revelations and underlayers of diaphanous yellow, green, and purple that are punctuated with sunset flashes of orange and red. Herein, the present work draws a uniquely evocative dialogue with late nineteenth-century landscape painting from a distinctly contemporary perspective. Invoking a self-referential language of abstraction, Abstraktes Bild nonetheless shares aesthetic and atmospheric congruencies with Claude Monet’s late Nympheas, Gustav Klimt’s jewel-like treatment of the Austrian landscape, and Georges Seurat’s proto-scientific treatment of light and color. Richter’s Abstraktes Bild shows an astute awareness of these artistic predecessors. Yet, the artist has frequently spoken of aspects of his work as ‘cuckoo’s eggs’ in that his paintings are often mistaken for something they are not, or not fully. While this most aptly applies to the artist’s take on the sublime landscape, it is also at stake within his response to both an evocation of an Impressionist landscape as well as the abstraction of the twentieth century’s great American painters.

Though comprising seemingly infinite tonal variations and intimations of abyssal layers beyond the picture plane, Abstraktes Bild is nonetheless a cancellation of the kind of transcendental sacred image space pioneered by Mark Rothko, Barnett Newman, and perhaps most apt for the present work, Franz Kline. As outlined by Benjamin Buchloh: “[I]f the ability of color to generate this emotional, spiritual quality is presented and at the same time negated at all points, surely it is always cancelling itself out. With so many combinations, so many permutational relationships, there can’t be any harmonious chromatic order, or compositional either, because there are no ordered relations left either in the color system or the spatial system” (Benjamin Buchloh, "An Interview with Gerhard Richter," in Benjamin D. Buchloh, Ed., Gerhard Richter: October Files, Cambridge 2009, pp. 23-24). Much like a palimpsest in its layered surface and repeated working over, the present work resembles a restless confluence of many paintings at once. The exuberant strata of paint bears the ghosts of previous accretions and color juxtapositions applied, erased, remade and obliterated over again. Such chromatic and compositional negations represent Richter’s rebuttal of the bold idealism of 1950s abstraction.

Richter’s entire production concerns itself with our contemporary age of the photographic. The present work is a rational, albeit innovative, progression from Richter’s Photo Paintings, a series which he explored beginning in the 1960s. The sheen of immaculate color and endless permutations mimic the aesthetic of a Cibachrome print. Meanwhile, a distinctly photographic quality is compounded by the out-of-focus consistency of the sweeping accretions of paint. Here, in the Abstraktes Bild paintings, the ‘blur’ from the Photo Paintings takes the form of ‘squeegeeing’ pared down to its elemental form. Within the sheer excess of layering and dynamic compositional fracture this painting emits an extraordinary wealth of enigmatic yet recognizable information. This denial of formal resolution induces a reading of forms associated with those found in nature. Readily evoking natural experiences such as rain, water, erosion, or in this case light streaming through a window, the Abstract works derive their effect from a spontaneous naturalism. Whereas Richter’s Photo Paintings fall away into abstraction, the Abstrakte Bilder (‘Abstract Pictures’) return us to a suggestion of referentiality.

Compounding the sheer visual brilliance of Abstraktes Bild is the fact that it was completed in 1986, a seminal year within the artist’s career when he first began creating this now historic series. As many scholars of Richter’s work have pointed out, it is apt to note that the collective title for the abstract paintings, Abstraktes Bilder, is not a straightforward translation; rather, the closest equivalent to the original German is Abstract Pictures. By his own admission, Richter is not creating paintings but instead creating images. Variously evoking something of Monet’s translation of his garden at Giverny, Rothko’s exuberance of transformative color, Kline’s structural expressionism, Jackson Pollock’s instigation of autonomous composition, and Willem de Kooning’s transferal of the figurative to the abstract, Richter’s abstraction is ultimately without comparison. Within the field of this canvas, acts of unfathomable chaos have touched something not quite of this realm, creating, in short, something that is phenomenal.