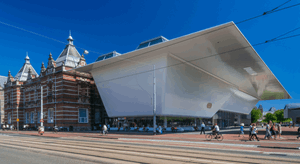 Pursuant to the statement issued yesterday by Barbara Radice and Ernest Mourmans, heirs to Ettore Sottsass Estate, the Stedelijk Museum Amsterdam has issued a right of answer comment.

Pursuant to the statement issued yesterday by Barbara Radice and Ernest Mourmans, heirs to Ettore Sottsass Estate, the Stedelijk Museum Amsterdam has issued a right of answer comment:

“It is clear that we disagree on how you make an exhibition. The Stedelijk Museum Amsterdam has a tradition of exhibitions based on research and giving a new perspective to known presumed subjects. In this case, we wanted to show the work of Ettore Sottsass in such a way that it becomes visible how broad his oeuvre is, what his important themes were and which young designers he inspired. A chronological exhibition such as the heirs had in mind, has been done before.

The Stedelijk sets itself the task of challenging and not always entering the beaten track. And Sottsass's work also demands that in our opinion. The motto questioning, not confirming is always leading at our museum. We talked with the heirs for a long time, but adjusting the concept was their absolute condition and we could not go along with that. Like the heirs, we regret that the general public cannot now get to know the work of Sottsass.”