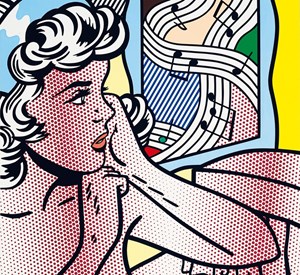 With his ‘Nudes’ series, the Pop artist tackled one of art history’s most longstanding genres. Specialist Ana Maria Celis explains why this work from 1994 — offered in the trailblazing ONE sale on 10 July — reveals an artist in complete mastery of his craft.

With his ‘Nudes’ series, the Pop artist tackled one of art history’s most longstanding genres. Specialist Ana Maria Celis explains why this work from 1994 — offered in the trailblazing ONE sale on 10 July — reveals an artist in complete mastery of his craft.

With his celebrated ‘Nudes’ series from the mid-1990s, Roy Lichtenstein’s career came full circle. Its 20 paintings saw him return to the comic-book heroines that had helped first propel him to fame — and the forefront of the Pop art movement — in the early 1960s.

On 10 July, Nude with Joyous Painting (1994), a monumentally scaled standout work from the series, is being offered in ONE, a new sale format at Christie’s connecting Hong Kong, Paris, London and New York. Ana Maria Celis, Head of Evening Sale, Post-War and Contemporary Art at Christie’s, describes the work as ‘the most important example of Lichtenstein’s last great series of Nudes to have ever appeared at auction’.

The painting features a blonde American beauty alone in her bedroom, wearing nothing but a blue headband and red lipstick. She’s startled by some unexpected disturbance out of picture to the right. Lichtenstein crops in tight on her body, creating a sense of tension worthy of a Hitchcock thriller.

Lichtenstein painted the work in his signature ‘Ben-Day dot’ style, mimicking the agglomeration of small coloured dots used for printing comic books in the mid-20th century. While the artist adopted the style throughout his career, comic books ceased to provide the actual source material for his scenes for the best part of three decades — between his early works (such as Nurse) and the Nudes series. 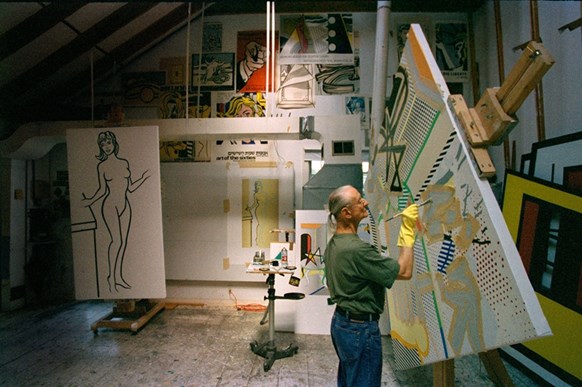 Roy Lichtenstein in his studio in Southampton, New York, in 1997 — the year in which he died, aged 73. Photo: © Bob Adelman Estate. Artwork: © Estate of Roy Lichtenstein

The protagonist of Nude with Joyous Painting  was derived from a vintage DC Comics series called Girls’ Romance — specifically, a bather named Gloria, who’s saved from perilous waters by a sun-kissed lifeguard named Bob. Lichtenstein removed her from the beach setting and relocated her in a domestic interior.

With the canvases in this series, Lichtenstein tackled one of the most longstanding of genres: the nude. ‘It was his way of exploring the whole medium of painting, in what would turn out to be his last body of work,’ explains Celis. 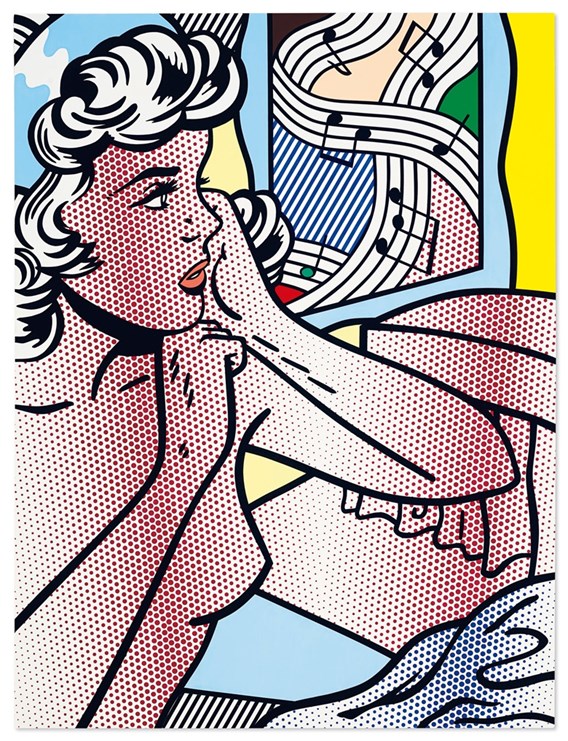 Offered in ONE at Christie’s in New York on 10 July. Artwork: © Estate of Roy Lichtenstein