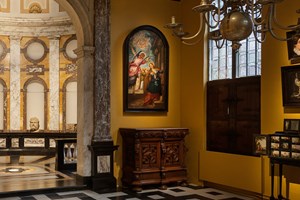 The Rubens House has the privilege of unveiling David Bowie’s Tintoretto. The British rock star owned St Catherine by the Venetian painter Jacopo Tintoretto (1518–1594) for over 30 years. Following Bowie’s death in 2016, his exceptional art collection was auctioned on 10 November that same year at Sotheby’s in London.

The Rubens House has the privilege of unveiling David Bowie’s Tintoretto. The British rock star owned St Catherine by the Venetian painter Jacopo Tintoretto (1518–1594) for over 30 years. Following Bowie’s death in 2016, his exceptional art collection was auctioned on 10 November that same year at Sotheby’s in London. There was one noteworthy old master amongst the modern and contemporary works by the likes of Frank Auerbach, Jean-Michel Basquiat and Damien Hirst: Jacopo Tintoretto.

Bowie, like Rubens, was an immense admirer of the Venetian artist. Rubens not only drew inspiration from Tintoretto for his own work, he also had seven of his fellow artist’s paintings in his own collection. The monumental St Catherine altarpiece, painted in the 1560s, was purchased by a private collector who announced to the world’s press within minutes of the sale that he would be loaning the painting long term to the Rubens House – ‘a museum Bowie loved’. What David Bowie never knew is that a brilliant underdrawing lies hidden beneath the layers of painting, as discovered recently during technical examination of the altarpiece at the Royal Institute for Cultural Heritage (KIK-IRPA) in Brussels.

The underdrawing suggests that the work can be dated to roughly a decade earlier than previously thought and shows how Tintoretto developed the painting in his own hand, continually adjusting the composition as he worked. The Colnaghi Foundation, in collaboration with the Rubens House, will present a scholarly publication in October devoted to Tintoretto, Rubens and Bowie, with contributions from several international specialists. The Flemish Minister of Tourism, Ben Weyts, was so impressed by the whole story recently that he promptly gave his backing to a tentative plan to return the painting temporarily to Venice, where Tintoretto’s altarpiece will now be exhibited at the 2019 Biennale, accompanied by a raft of Flemish old masters who were amongst the Venetian artist’s admirers.

Tintoretto painted St Catherine around 1560–70 for San Geminiano on St Mark’s Square in Venice, a small but prestigious church designed by the architect Jacopo Sansovino, which was already famous in the Renaissance period for its exceptional interior with works by Giovanni Bellini, Paolo Veronese and Tintoretto. Rubens almost certainly saw the altarpiece there and his celebrated pupil Anthony van Dyck even sketched it in situ. Their Venetian counterpart was an important source of inspiration for both Rubens and Van Dyck, and Rubens continued to be influenced by Tintoretto’s inventions until the end of his career.

St Catherine remained in the church until it was demolished in 1807 during the Napoleonic period. It was briefly placed in the Galleria dell’Accademia, before disappearing into private ownership. David Bowie purchased the work 30 years ago from the London art dealer Colnaghi. The musician was so fascinated by the Venetian painter that he named his record label after him.

Since the announcement in November 2016 that the painting would be loaned long term to the Rubens House, Ben van Beneden has worked closely with the Colnaghi Foundation on a plan to return the altarpiece temporarily to Venice during the 2019 Biennale. When the Flemish Minister of Tourism, Ben Weyts, learned of the plan, he immediately decided to support it through Tourism Flanders. The painting will be the centrepiece of an exhibition in 2019 on the demolished Church of San Geminiano and the artworks it once housed.