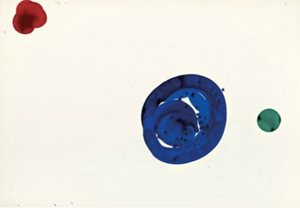 Horizon is Christie's special curated online auction bringing together Post-War and Contemporary artworks that incorporate and investigate the landscape, sky(line) and flight, but also consider the concepts of perception and perspective. Among the many highlights are thought provoking works by Louise Nevelson, George Condo, Petra Cortright and Neil Raitt. Bidding begins on 13 August at 10am EDT and begins closing lot by lot on 23 August at 12pm EDT. Works will be on view in our New York galleries from 17 - 23 August.

Painted in 1963, the present lot expands the horizons of Francis’s infamous Blue Balls series. Regarding these blue orbs, he wrote: “I live in a paradise of hellish blue balls—merely floating, everything floats, everything floats.” These orbs appear to float and flow around the perimeter of the picture plane, their fluid movements reflecting their organic disk-like shapes. The sharp contour of the orbs as well as the relative absence of splatter and drip found in much of his other works is an expansion of Francis’s meditation on painting, emphasizing space that is marked, and that which is not.

This work is identified with the interim identification number of SF63-083 in consideration for the forthcoming Sam Francis: Catalogue Raisonné of Unique Works on Paper. This information is subject to change as scholarship continues by the Sam Francis Foundation.

Provenance: The Sam Francis Estate, Venice, California. Acquired from the above by the present owner, 2000.