Simon Hewitt on Leonardo da Vinci and The Book of Doom 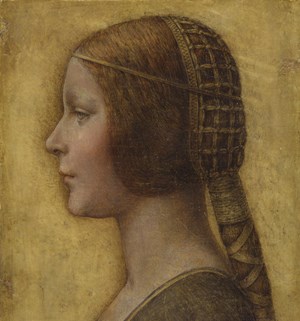 In October Hewitt released his new book, Leonardo da Vinci and The Book of Doom, investigating the subject of Leonardo’s beautiful and haunting portrait of Bianca Sforza known as La Bella Principessa, and comprehensively debunking claims made in 2015 by British artist and convicted forger Shaun Greenhalgh to have produced the work himself.

Simon Hewitt studied History of Art at Oxford University and has been writing about and investigating art for more than 30 years. In 1985 he moved to Paris, where he became correspondent for Antiques Trade Gazetteand Art + Auction. In 2018 his article for TheArt Newspaper exposed a fake Russian Avant-Garde exhibition in Ghent, leading to the dismissal of the Museum Director.

In October Hewitt released his new book, Leonardo da Vinci and The Book of Doom, investigating the subject of Leonardo’s beautiful and haunting portrait of Bianca Sforza known as La Bella Principessa, and comprehensively debunking claims made in 2015 by British artist and convicted forger Shaun Greenhalgh to have produced the work himself. In his new book Hewitt sheds light on the fascinating life of Bianca Sforza, explores her relationship with Leonardo, and reveals details of her tragic murder, including the likely suspect and motive.

In a groundbreaking new discovery, Hewitt also reveals evidence that Leonardo’s colleagues in the Milanese art world poked gentle fun of him as an absent-minded ginger-haired gay, in striking contrast to the image of the white-bearded deity we have of Leonardo today. Leonardo da Vinci and the Book of Doom by Simon Hewitt, book cover

ArtDependence (AD): 'The greatest art discovery of the century'. Can you give us a short summary of the discovery that gave rise to this headline?

Simon Hewitt (SH): It concerns a tiny image, dubbed an Allegory of Justice, that dates from 1495, and is part of one of the eight full-page illustrations in a manuscript version of Paolo e Daria, a tale by Milan court poet Gaspare Visconti. The image lampoons Leonardo as a clerk of court, doodling away on his desk-top while gawping at a half-naked young man across the room. I came across a fuzzy reproduction of this image in an American dissertation while scouring the Internet for information on late 15th century Milanese manuscripts. It was not captioned as Leonardo. I was intrigued, so I went to see it in the Berlin Küpferstichkabinett, where it is housed. Librarians there had no idea it showed Leonardo either, but when I examined it in the flesh it was clear that it was a previously unknown portrayal of Leonardo, clean-shaven and with ginger hair: a far cry from the white-bearded God-the-Father we are used to – instead, a 42 year-old who had the mickey taken out of him by his colleagues.

AD: How did it feel to make a discovery of this kind? How certain did you feel about your own findings?

SH: I felt (1) excited, (2) worried someone might publish it before me, (3) astonished that no one, in over 500 years, had identified this image for what it was. Certain? 100%. The clerk is left-handed, like Leonardo; he has a lyre at his feet, the musical instrument Leonardo reputedly played; and he is shown wearing the same clothes, and with the same tilt of the head, as the figure of Heraclitus in the fresco Heraclitus & Democritus now in the Brera, which many scholars believe to portray Leonardo and Bramante. And this fresco was originally painted for the home of... court poet Gaspare Visconti, where Bramante was a lodger.

AD: What extra insight can we expect from the book?

SH: Nearly all studies of Leonardo concern his paintings and drawings. No one has ever assessed his involvement with books. Yet illustrating books was the single most important (and lucrative) artistic activity at the Sforza court in Milan, where Leonardo spent 16 years. My book is the first to place Leonardo within this context. AD: Did you enjoy writing the book?

SH: Immensely. Writing is a daily pleasure, and my research also involved extensive travel through Italy and Poland, and exploring some out-of the-way places in France, Austria, Russia and Ukraine.

AD: What is the most important thing you learned while writing this book?

SH: That so many prestigious figures in the Art World are more interested in their own reputations than in artistic truth... even if the victim of their ego and vanity is someone as important to world history as Leonardo da Vinci. The campaign to denigrate Leonardo’s portrait is the artworld equivalent of the Dreyfus Affair. The page containing Birago's illustrations in the Sforziada - the book that originally contained Leonardo's portrait, image courtesy for Simon Hewitt

AD: If you could ask Leonardo one question, what would you ask?

AD: Do you believe there are still people who doubt your findings? What would you say to them?

SH:Of course there are. I would say nothing to them, it would be a waste of breath. Few people know how to use their eyes. Still fewer know how to keep an open mind. AD: What's next? Will you continue your investigations or will you work on other projects?

SH: I have been asked to give some talks and lectures about the book but, after five years devoted to the same project, Now for something completely different! as Monty Python used to say: a book about European Cricket, and how my late friend Richie Benaud helped me challenge the Lord’s Establishment over their attempts to ban continental youngsters and female players from international competitions. Out next year.