"Something between performance and exhibition" - an interview with Brett Bailey 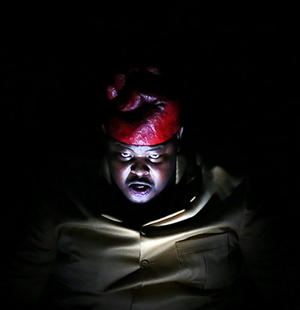 Bailey is often labelled as fearless in his approach towards polemic issues: he brings racism, colonial history and neo-colonialism onto the center stage, exploring the loaded subjects of abuse, power and control, often facing criticism for his audacity, as a white South African, to delve into experiences that are not considered to be his own. As an example, one only has to look at the heated response ignited by Exhibit B, a touring performance labelled as an exhibition. Artdependence Magazine catches up with Brett Bailey to reassess, a year later, the causes and consequences of Exhibit B, and to find out more about his technique and future plans.

Playwright, play director, artist, designer – these are among the many of Brett Bailey’s occupations. In 2008 he founded the Infecting the City Festival, which became South Africa’s biggest public arts festival, taking place yearly in the streets of Cape Town. He is also founder and artistic director of Third World Bun Fight, a performance company whose mission involves channeling the transformative power of performance to expose both the bitter and the sweet of humanity.

Bailey is often labelled as fearless in his approach towards polemic issues: he brings racism, colonial history and neo-colonialism onto the center stage, exploring the loaded subjects of abuse, power and control, often facing criticism for his audacity, as a white South African, to delve into experiences that are not considered to be his own. As an example, one only has to look at the heated response ignited by Exhibit B, a touring performance labelled as an exhibition, which drew from the phenomenon of 19th Century “human zoos” to re-create in twelve mini-stages the objectification of human beings that took place at the time and, most importantly, re-imagining these scenarios within the present-day context of asylum seekers. The objective was to display and question the very power structures that sanction racism; however, there were many who accused Bailey of the complete opposite: more than 19,000 signatures were gathered to call for the cancellation of the Paris showing of Exhibit B in 2014.

It is vital to note in the case of Exhibit B that those on the podiums were not the only actors in the show – the spectators themselves were listed among the components of the installations, whose aim was not to isolate subject and spectator, but rather to highlight the connection between the two as they look upon each other, both equally subjected to the opposing gaze. Artdependence Magazine catches up with Brett Bailey to reassess, a year later, the causes and consequences of Exhibit B, and to find out more about his technique and future plans.

AD: For Exhibit B you employed real refugees, whose authentic stories and struggles provided the “power of presence, rather than performance.” Obviously, there was theatricality involved in this piece, but it was labelled as an exhibition – which normally involves the display of objects. You clearly wanted to illustrate the objectification of people. But, with regards to the backlash and criticism you received, do you think that in some way it had to do with the incongruity of a ‘live exhibition’, and that your concept would have otherwise been (more) accepted within a theater, on stage?

Would the work have been more accepted within a theatre? Perhaps. It’s difficult to say. At Theatre Gerhard Philippe in St Denis, the work was indeed performed in a theatre, and some of it on a stage. The protests there were furious.

Although the work is called ‘EXHIBIT B’ and, as you say, refers to the objectification of the ‘Other’, I have always termed the piece a performance, or something between performance and exhibition. I think that outside of performing arts circles there is little understanding of performance: theatre is perceived as a ‘play’ that takes place on a stage with curtains and the audience all sitting in rows in the dark. A work that deviates from that convention can easily be perceived, by those on the outside, as strange and incomprehensible.

The way I see it, I created 12 small stages, in which the performers remain static, and the audience moves from stage to stage. The convention is similar to that in an art exhibition or a zoo, and this could reinforce notions that the work is a reproduction of a human zoo.

Would you consider Exhibit B as a constructive project, in that it incited discussions not only on racism and discrimination towards refugees and immigrants, but also regarding the conditions of theater/performance and the legitimacy of the artist to broach these subjects?

EXHIBIT B has been performed 18 times. In Berlin in 2012 there were small-scale protests. In London and Paris last year, as you know, there was an explosive reaction. In 14 of the 18 presentations the response was overwhelmingly positive, and also in the Berlin and Paris there was a huge amount of support for the work (in London it was closed down at the premiere). Overall, I think EXHIBIT B has been very constructive project – confronting people with the concealed histories of colonial brutality, and with the racism still alive and thriving all over the world.

Yes, I think that it has been constructive in some respects in the areas you describe: it has resulted in a lot of soul searching and reflection in the institutes that were criticized for presenting the piece. I know that the Barbican has made proactive changes to begin addressing some of the criticisms it received. In Paris a lot of people and organizations took a very firm stance, ensuring that EXHIBIT B would not be closed down, in the belief that yielding to the outrage of every offended minority would result in the death of freedom of expression. People were forced to think, and to make choices.

But it also resulted in a good deal of anger and in people from opposing camps screaming at each other. In such situations there can be little discussion, and not much listening to each other, and that is not constructive…

“White African”, “Black American” – what is your view on these labels, and such markers of identity, regarding their relevance in our globalized, contemporary society, and their relevance on a personal level.

For me labels only really have validity when we use them to describe ourselves, to define our own identity. When they are used by others to define us – or by us to define others – they are much more dangerous: they herd people together into generalizations. I much prefer using labeling words as adjectives – ‘I am a gay, white, African man’, where they describe me in an open way. Calling myself ‘a white, African homosexual’ or ‘a gay, white African’ puts me in a particular box with defined parameters, and seals the lid.

The issues you approach in your work, such as racism, tend to elicit heavy emotional responses, converging between guilt, blame, shame, responsibility, and denial. On the one hand you can tap into these emotional responses, but perhaps you also want to provoke contemplation, appeal to reason – how do you find that these two elements present themselves in your work?

Yes, I also want to provoke contemplation and appeal to reason. Sometimes I’m concerned that this aspect is swamped by emotion in EXHIBIT B. The work was certainly made with the intention of encouraging people to reflect on the irrational brutality of racism; on how pervasive and pernicious it is; on how Power represents and frames the Other in particular, insidious ways in order to perpetuate its agendas; on the spectator’s individual, personal relationship to those who are seen to be different…

The device on which the performance works – the performers gazing back at the spectators – can neutralize this element of contemplation. The experience of being watched while reading the imagery and texts of colonial atrocities can be overwhelming emotionally. Were the performers gazing into the distance, or if they were mannequins – like in a museum – the atmosphere would have been utterly different: much cooler, much more reflective. But of course as performance it would not work as well, and politically it would be disastrous.

In your work you often integrate ceremonies, rituals. The theatrics of reality are very different in the Western world, and you’ve commented before on your view of conformation as the norm. Do you think contemporary art in the West is concerned with engaging the physical and spiritual, as a powerful accompaniment to the emotional and intellectual?

I cannot make generalizations. In Amsterdam, where I studied 15 years ago, I found the emphasis to be predominantly on the intellectual/conceptual, with very little space for the emotional. In the Republic of Ireland, where I recently mentored several emerging artists on their developing pieces, I found the emphasis to be on the personal and emotional, very little on the conceptual. Just two examples. There is wide diversity. Artists work with the material that grows in their backyards, or else look to distant horizons. In different countries, in different groupings that span geographic borders, artists are exploring vastly different territories.

Since you’re interested in breaking out of the confines of the theater, do you have a space in mind that you would love to work with?

I’d like to work in cathedrals and in cemeteries, but I haven’t found the right work yet.

What is currently drawing your attention, and what are your plans for this year?

There are two unfolding scenarios that are attractive to me at present: the crisis of migration in the Mediterranean, with refugees fleeing untenable situations in various African and Middle Eastern states, and making a desperate dash for security and a better life on European shores, in the face of the hardships and hostility they will find there. And the decay setting in in South Africa, as infrastructure crumbles, corruption spreads, inequality blossoms, and the frustration and anger of the disaffected and disenfranchised smolders and sparks. I will tour with MACBETH and EXHIBIT B extensively this year in Europe, Latin America, Asia and Australasia, and try to find time to begin making two pieces based in these two scenarios.