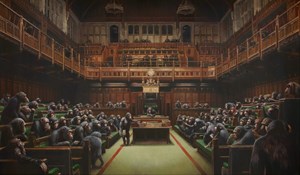 The monumental canvas, which made headlines around the world even before its appearance in the London galleries, sparked a 13-minute bidding battle on the phones and in the room. 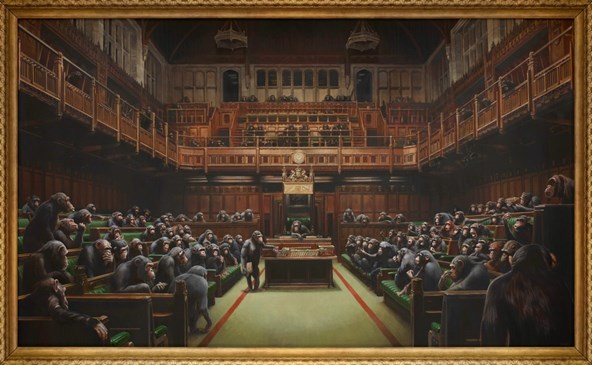 Potent and poignant, bold and brash, Banksy’s monumental oil painting of the House of Commons offers a premonitory insight into the increasingly tumultuous face of politics in contemporary Britain. Spanning an impressive thirteen feet in length, this is the largest known canvas by the anonymous street artist whose subversive practice has granted him a reputation of infamy as much as world renown. Bitingly satirical in nature, the present painting depicts the inner sanctum of British politics; yet instead of debating MPs, the House of Commons is here filled with chimpanzees in a scene of mayhem and madness. The work was executed a decade ago and first exhibited in the ground-breaking Banksy versus Bristol Museum exhibition, which took place at the Bristol Museum & Art Gallery in 2009, famously attracting over 300,000 visitors. Entitled Question Time at the time of the show, the painting has since been reworked by the artist and more recently retitled. Once glowing, the Commons' lamps have been snuffed-out by Banksy, while the upturned banana of an ape in the foreground now faces downwards; atop these and other subtle adjustments, the painting also bears a new name: Devolved Parliament. Exhibited under this title, the present work returned to the spotlight in a timely exhibition at the Bristol museum which debuted just prior to 29th March: the date originally intended to mark Britain’s exit from the European Union. So-termed Brexit Day, the repeated deferral of this date, most recently to 31st October, makes Banksy’s prophetic and sardonically humorous Devolved Parliament ever more pertinent.

Born and bred in Bristol, Banksy has achieved a now legendary status that teeters between acclaim and notoriety for his distinctive style of satirical street art and graffiti. His work is rich in dark humour and frequently captioned with subversive epigrams that provide pejorative commentaries on socio-political aspects of contemporary life. Seeking to disturb and disrupt the status-quo through his interrogative and anti-establishmentarian practice, Banksy has epitomised his own mission with the adage: ‘Art should comfort the disturbed and disturb the comfortable’ – a modern day take on the turn-of-the-century American satirist Finley Peter Dunne’s declaration that the duty of a newspaper is to “comfort the afflicted and afflict the comfortable” (Finley Peter Dunne cited in: Dean P. Turnbloom, Ed., Prizewinning Political Cartoons: 2010 Edition, Gretna 2010, p. 146). Throughout his career Banksy’s art has been frequently dismissed as crass or glib; yet in spite of this, his work can be seen to fit into a rich and venerable history of political parody. From the British pictorial satirists of the Eighteenth Century, including Thomas Rowlandson, James Gillray and, of course, the great William Hogarth, through to the allegorical writings of George Orwell whose revolutionary novel Animal Farm similarly utilised zoological symbolism to critique modern society, and on to the political cartoonists of the present day, Banksy’s finest work is situated within an esteemed tradition of raising an unforgiving and illuminating mirror up to the world.

The political sector has long piqued the interests of the world’s purveyors of history. Indeed, within the canon of art history, painters such as Hogarth sought to expose the underlying controversy, corruption and chaos that lay at the heart of British politics before the Great Reform Act of 1832. In his four-part Modern Moral Subject The Humours of an Election (1755), Hogarth seditiously portrays the many vices at play during the 1754 electoral canvasing of the Whig and Tory parties. In the first painting of the series, An Election Entertainment, a scene not dissimilar to Banksy’s Devolved Parliament unfolds: the canvas is filled with characters at a tavern dinner organised by the Whig candidates who, bawdy and boozed, are engaged in a litany of lawless behaviour. From bribery to gluttony, violence to total inebriation, the degenerative scene is comically ironic. Procuring an analogous sentiment, Banksy’s Devolved Parliament insinuates a deterioration of logical order in modern day politics. Leering and jeering from the stands, the troop of parliamentary apes in Banksy’s hyper-real dystopia seem to flip Darwin’s Theory of Evolution on its head. As the artist has remarked with characteristically dry wit: “You paint 100 chimpanzees and they still call you a guerrilla artist” (Banksy cited in: Caroline Goldstein, ‘Banksy Is Giving His Painting of Chimpanzees Overrunning Parliament a Special Appearance to Mark “Brexit Day”’, Artnet News, 29 March 2019, online).

The chimpanzee has appeared as a recurring motif in Banksy’s oeuvre since 2002, when the artist produced a six-meter-long stencilled graffiti work entitled Laugh Now. The work depicts a row of subservient apes wearing aprons, some of which bear the inscription ‘Laugh now, but one day we’ll be in charge’. It has since become one of Banksy’s most iconic and widely disseminated images, making headlines in 2008 when the original artwork sold successfully at auction, breaking the record for the artist at the time. An homage to this earlier work, Devolved Parliament presents the stark realisation of this premonition. As Banksy wryly declared on his Instagram account upon the recent exhibition of Devolved Parliament ten years on from its execution: “Laugh now, but one day no-one will be in charge”. One can but hope the artist’s seemingly astute clairvoyance does not take us so far. Considering Banksy’s mature practice, author Patrick Potter has stated, “These images can be really arresting at their best. They’ve evolved from the kind of cartoonish carnival of Banksy’s animal army to controlled irony, designed to reveal the foolishness hidden in plain view in our society’s values” (Patrick Potter, Banksy: You are an acceptable level of threat and if you were not you would know about it, Durham 2012, n.p.). Certainly, rendered on a grand scale which rivals the great History Paintings of the Neoclassical age, the present work points to the animalistic pandemonium of global politics in recent years.

Devolved Parliament comes to auction exactly a year on from the unprecedented media storm surrounding the first ever creation of an artwork during a live sale, when Banksy’s Girl with Balloon auto-destructed as the gavel came down at Sotheby’s last October to become the freshly titled Love is in the Bin; an artist-driven hoax at the auction house’s expense that epitomises Banksy's anarchic and rebellious spirit. Commenting on the artist's modus operandi, Potter has stated, “By laughing at the spectacle we undermine its power and make room for a bit of original thought” (Ibid.). Indeed, striking for its simple and raw immediacy, which merges societal critique with art historical wit, the power of Banksy’s work herein lies in its easy-accessibility and instant-gettablility. His derisive art has provoked divisive opinion, but love him or hate him, his wide-reaching influence on contemporary art and urban culture cannot be denied. With each day bringing new commotion to the political arena, Devolved Parliament could not be more prescient!