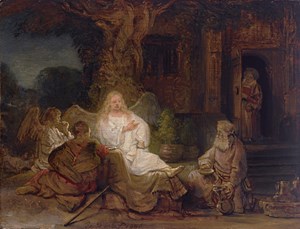 Sotheby’s announced that an extraordinary and rare biblical scene by Dutch Golden Age master Rembrandt van Rijn will be a highlight of our annual New York Masters Week sale series in January 2021.

Sotheby’s announced that an extraordinary and rare biblical scene by Dutch Golden Age master Rembrandt van Rijn will be a highlight of our annual New York Masters Week sale series in January 2021.

Measuring just 6 ½ by 8 ⅜ inches (16 x 21cm), Abraham and the Angels is a profoundly beautiful, gem-like painting on panel from 1646 that stands among the finest works by Rembrandt ever to come to auction. The painting last appeared at auction in London in 1848, when it sold for £64, and returns to the block this January with an estimate of $20/30 million. The work was recently the principal subject of an exhibition at the Frick Museum in New York in 2017 dedicated to Rembrandt’s depictions of Abraham from the Book of Genesis. 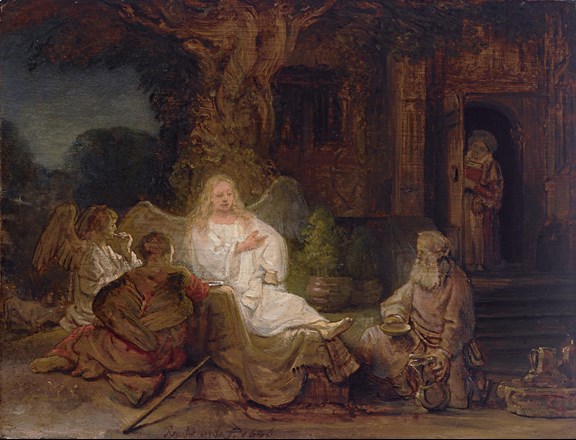 Of the total 136 biblical paintings Rembrandt produced, the present work is one of only five remaining in private hands, with the large majority in prominent museum collections. Among these biblical paintings, only 29 depict Old Testament scenes, with the present panel representing one of only two examples in private hands – the other being a portrait of King Uzziah stricken with Leprosy, which resides in the Devonshire Collection at Chatsworth House. As such, Sotheby’s January auction of Abraham and the Angels marks an exceedingly rare opportunity for collectors to acquire a masterpiece of this important subject by the artist.

Just this summer, Sotheby’s achieved a new auction record for a self-portrait by Rembrandt when Self-portrait of the artist sold for $18.7 million in our London sale Rembrandt to Richter(July 2020). In December 2018, the Louvre Abu Dhabi acquired the artist’s work Head of a young man, with clasped hands: Study of the figure of Christ from a Sotheby’s London auction for $12.1 million. The work, which was identified as a Rembrandt in the 1930s, belongs to a series of oil sketches referred to as his “Face of Jesus” group. Prior to that sale, the last biblical scene to appear at auction was Saint James the Greater from 1661, which sold for $25.8 million at Sotheby’s New York in 2007.

George Wachter, Sotheby’s Chairman and Co-Worldwide Head of Old Master Paintings, remarked: “We are honored to be entrusted with this exceptionally beautiful image from one of Rembrandt’s celebrated Old Testament scenes. The subject of Abraham visited by three angels proved a fruitful source for etchings and engravings, but this was Rembrandt’s only painting of the story. Painted in the 1640s, when the artist was moving into a more thoughtful and deeply emotional period of his career, this gem-like panel is an outstanding example of the artist’s ability to depict a complex and moving composition on a small scale. With the vast majority of his biblical scenes in institutional collections, it is extremely rare to see such a major work at auction – with this one making its last appearance nearly 175 years ago. Outside of its rarity and condition, which is pristine, it is among the very few works by the artist whose authorship has never been questioned and is an indisputable masterpiece by the artist.”

While Rembrandt is largely known for his portraiture, these works were just one aspect of his artistic expression. It is, arguably, in his historical scenes – comprising mythological, biblical and allegorical scenes, in addition to landscapes – where he found the freedom to express himself, and to experiment more freely. Painted in 1646, during an emotionally-turbulent yet highly productive period of his life, Abraham and the Angels depicts the precise moment when God, the principal source of light in the scene, reveals to Abraham that his elderly wife Sarah will bear him a son, Isaac, within a year. We can almost make out the smile on the disbelieving Sarah’s face, as she leans out of the door to their house and overhears the proclamation of the Lord.

As is typical of the artist's work of the 1640s, in which he moved away from the highly Baroque concept of capturing the most dramatic instance of a story, in favor of a more subtle rendering worthy of thoughtful observation, Rembrandt chose to illustrate the most emotionally poignant moment of the story – conveyed solely by light and a single, gently raised hand.

In addition to being one of the most well-documented paintings by Rembrandt in existence, this work also boasts an impeccable provenance, nearly unbroken from the year after its execution to the present day. Traceable to a transaction in Amsterdam in 1647 between Martin van den Broeck and Andries Ackersloot, the picture has passed through the collections of a number of notable figures including: Rembrandt’s former pupil Ferdinand Bol; 17th century merchant and Amsterdam mayor Jan Six; and with the American expatriate painter Benjamin West. After passing through several other hands, including the important collection of Sir Thomas Baring in the mid-19th century, the work entered the celebrated Pannwitz Collection in Heemstede, later to be folded into the Aurora Trust – where it had remained with the Pannwitz family for at least 90 years. The painting has remained in the same collection since it was last sold privately in 2006.

The work has been publicly exhibited only a handful of times over the years, recently appearing in Rembrandt’s Journey: Painter, Draftsman, Etcher at the Museum of Fine Arts, Boston & The Art Institute of Chicago in 2004, at the Gemäldegalerie in Berlin in 2006, and most recently as the subject of the Divine Encounter: Rembrandt’s Abraham and the Angels at the Frick Museum in New York City in 2017.