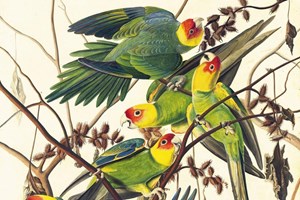 Sotheby’s is pleased to announce that an early subscriber’s edition of John James Audubon’s incomparable The Birds of America will be offered in a single-lot sale immediately following our Fine Books and Manuscripts auction on 18 December. Estimated to sell for $6/8 million, the work is now on public view in our York Avenue galleries through 11 November, alongside works from Sotheby’s marquee auctions of Impressionist & Modern and Contemporary Art. Extended viewing of the edition will be available 16 – 18 November, where it will be exhibited alongside work from Sotheby’s American Art auction, and from 14 – 17 December with work from the Fine Books and Manuscripts auction. 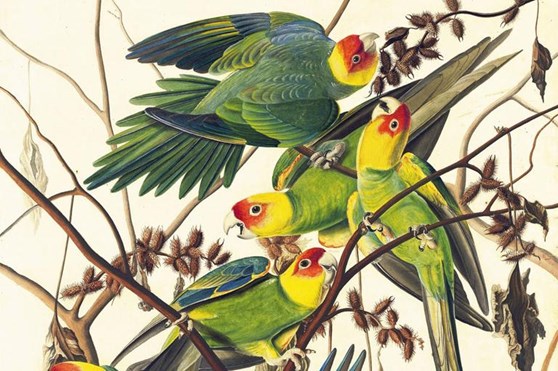 Featuring 435 magnificent hand colored etched plates depicting 1,065 life-size birds representing 489 supposed species of the then-known birds found in the United States, the present folio is an unusually large and brilliantly colored edition, with the plates in very early state. Commonly known as the Double Elephant Folio – named for the size of the paper that had to be specially made for the publication – The Birds of America has long been recognized as the most important and most beautiful color-plate book ever published, and it is universally acknowledged as one of the most important achievements in both book illustration and natural history.

Richard Austin, Head of Sotheby’s Books & Manuscripts Department in New York, commented: “We are thrilled to have this early subscriber’s edition of Audubon’s classic Birds of America on extended view at Sotheby’s before the December sale. Most people are familiar with Audubon’s iconic illustrations from single plates or later reproductions, but having the monumental four-volume double elephant folio on display is truly a remarkable opportunity for the public to experience the beauty of Audubon’s achievement and these wonderfully colored depictions of American birds in the format the artist intended. It’s nearly 10 years since Sotheby’s established the current auction record for Birds of America in London in 2010—which sold for $11,569,611 and also established the auction record for any book—and we are excited to once again offer an exceptional example of a work that has captured the public imagination for generations.”

Audubon began working in earnest on Birds of America in 1820, and the preparation and printing of the plates took from 1827 through 1838. The monumental work was sold by subscription with approximately 175 to 200 full sets issued. Just 119 complete sets of Birds of America are known to exist today, with 104 held in private institutions including universities, libraries and museums, and 15 in private hands. 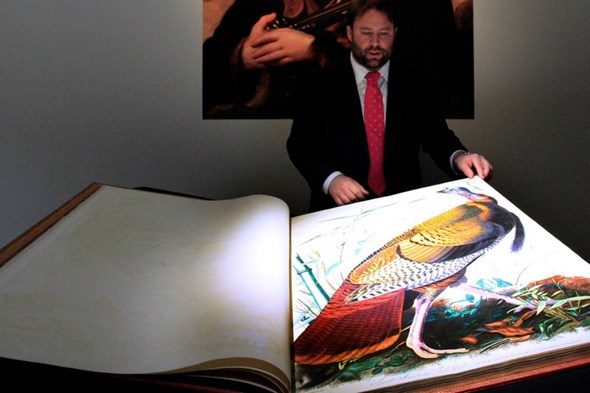 A first edition of John James Audubon's “The Birds of America” is shown during a preview at Christie's auction house in New York, in this January 13, 2012, file picture. Photo: Reuters

For his subscription service, Audubon planned to issue 80 parts or fascicles, each containing images of five birds: one large, one of medium size, and three small species. Early in the process, Audubon was forced to change engravers, and production was further delayed since he continually discovered so many new subjects during subsequent trips back to America. The Birds of America was eventually extended to 87 parts totaling 435 engraved plates, many of which depicted more than one species. As each century of prints was completed, subscribers were sent an engraved title-page so that the volumes could be bound to their personal specifications. Audubon decided to publish descriptive texts separately from the plates, primarily to circumvent British copyright-deposit laws, and a set of the separately printed text, Ornithological Biography, accompanies the present edition.

John James Audubon was born in Les Cayes, Haiti in 1785, and lived in France from age five to eighteen. He began to truly copy nature and develop the techniques that would inform his drawings when he moved to the United States in 1803. The study of birds of America became the principal avocation of Audubon’s adult life – his portfolio of drawings expanded rapidly, and Audubon began to give serious attention to the publication of his illustrations. While his desire was for his work to be produced in America, it was rebuffed by naturalists and engravers who were irritated by his criticism of Alexander Wilson’s pioneering American Ornithology. His backwoods persona viewed as exotic and exciting, England gave Audubon the acclaim the United States withheld – in 1826, he was introduced to William Home Lizars of Edinburgh, an engraver who made his grand vision a reality, although he was soon superseded by Robert Havell, Jr. of London. Within a few months, a prospectus for the work appeared, and the first subscribers were signed up, with 100 secured by the end of 1827.

The present edition has remained in the same private collection for more than 25 years, and was previously in the collection of Joseph Verner Reed, Sr., who gifted the edition to Deerfield Academy in Massachusetts upon his death. With the approval of the Reed family, Deerfield sold the volumes to help establish the Reed Arts Center at the school. Each volume in the set bears the bookplate of the Yorkshire Philosophical Society, which was the original subscriber.