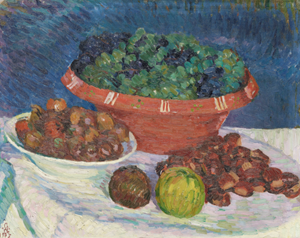 The Swiss Art Auction on 18 September will celebrate the 50th anniversary of Christie’s Switzerland, along with celebrating the 40th anniversary of Christie’s Zurich office. On 7 June 1968 the first ever lot of any Christie’s auction in Switzerland was knocked-down in Geneva. Ten years later, the second Swiss representative office was established in Zurich, where the company held its first Swiss Art auction in 1991.

The upcoming Swiss Art auction comprises 133 lots and will be led by 39 works from the private collection of Fred Tschanz (1929-2012). In 1962 Mr. Tschanz founded the “Fred Tschanz Gastronomie”, known for some of Zurich’s most renowned bars, restaurants and hotels, including the Café Odeon. In 2017 Christie’s sold the guestbook from the legendary café, which was filled with dedications and illustrations by renowned Swiss artists, celebrities and famous figures.

Fred Tschanz fused the cultures of gastronomy and art in continuation of great Swiss predecessors, such as the owners of the famous Kronenhalle in Zurich. However, Tschanz was focused only on collecting Swiss artists, of which many have been his contemporaries. The collection, assembled in the 1980s and 1990s, was built around two main themes, landscapes and nudes, from the 19th century to contemporary art, including works by Anker, Hodler, Varlin, Raetz and Castelli.

The leading painting of the collection is by Giovanni Segantini (1858-1899), Effeto di luna, executed in 1882 (estimate: CHF200,000-300,000). The work showcases a shepherd with his herd of sheep highlighted by the moonlight. The back of the canvas carries a statement of authenticity by Vittorio Grubici De Dragon, who was Segantini’s patron and first art dealer. The work was included in the latest museum show of the artist, held in 2001 at the Fondation Beyeler. Fred Tschanz was a renowned admirer of Albert Anker (1831-1910) and the collection includes eight works by the artist, highlighted by Portrait of a young girl, painted in 1872 (estimate: CHF120,000-160,000) as well as Die kleine Näherin, executed towards the end of the artist’s life in 1908 (estimate: CHF80,000-120,000).

The auction will open with 25 works of Swiss Contemporary Art, showcasing the wide-ranging achievements of 20th century Swiss artists. From restrained abstraction to bright figuration, the group encompasses a broad variety of movements, demonstrating the important contribution made by Swiss artists to European and international art over the past half century. Representing more conceptual territory is Not Vital’s (b. 1948) Sigmund Freud 6.5.1856(estimate: CHF30,000-40,000). This two-part silver sculpture forms a portrait of Sigmund Freud, based on his date of birth: a 5x6x6 cm box sits atop a plinth that measures 56 x 18 x 18 cm. World-renowned duo Peter Fischli (b.1952) & David Weiss (1946-2012), meanwhile, best-known for their witty juxtapositions of everyday objects, offer a disquieting look at the country in Siedlungen/Agglomerationen , a suite of photographs from a 1992 project that captures the apartment buildings and parking lots of suburban Zurich (estimate: CHF15,000-20,000).

The auction will end with a small offering of applied works of art by Diego Giacometti, including curtain rails and different sets of door and window knobs. Throughout the auction three faience plates representing history or mythology themes by Albert Anker (estimates range from CHF2,000-7,000) will be offered. Anker and Theodor Deck, the most eminent French faience specialist, met at Brasserie Hofmann in Paris where their very fruitful collaboration started. The 2 x 4 meter, Aubussion tapestry, designed by Le Corbusier (1887-1965), representing Les trois musiciennes, executed in 1958 (estimate: CHF120,000-150,000) is the top lot of this section. In the artist view, the tapestry was replacing the murals and responding to the society’s development for the ease of moving from house to house.