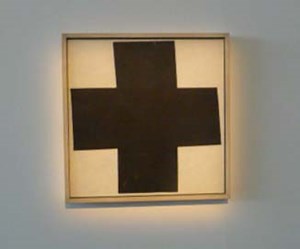 A Russian painter and Philosopher, Malevich is credited as the founder of the Suprematist movement, an avant-garde movement that has had a significant and lasting impact on modern art.

In 2014, the Tate Modern staged a retrospective exhibition of the work of Kazimir Malevich, titling the exhibit, Malevich: The Revolutionary of Russian Art. In their description of the artist they refer to his work as ‘some of the most progressive art ever made’. In a Guardian article about the show, he was named ‘the man who liberated painting’.

A Russian painter and Philosopher, Malevich is credited as the founder of the Suprematist movement, an avant-garde movement that has had a significant and lasting impact on modern art.

Malevich was the oldest of 14 children in a devoutly Christian family. His Polish father managed sugar refineries, causing the family to move frequently. Passing between Ukrainian villages where the teenage Malevich found an early appreciation of peasant art. He learnt to paint in the peasant style, admiring the landscapes and religious scenes he saw.

Malevich grew up surrounded by some of Europe’s most turbulent times. During the course of his life he witnessed discord in Poland, the onset of World War I and the October Revolution.

In 1904, Malevich lost his father. Shortly after, he moved to Moscow in 1907 where he decided to study at the Moscow School of Painting, Sculpture and Architecture. He remained at the institution until 1910. Malevich absorbed information and artistic practices, seguing between theories and methods.

He encountered work from Monet, Gauguin, Cezanne, Matisse and Picasso, discovering the avant garde and absorbing the theories and philosophies of artists from around the world and across the history books. He also read widely, studying literature and philosophy with vigour. But despite this new knowledge, Malevich did not forget the peasant art of his childhood, evoking icons and appreciating the bluntness and simplicity of the form.

Malevich’s work began to gain attention. After graduating he hosted a successful exhibition in Paris and in 1915 he began to lay down the foundations of the Suprematism movement. He published a manifesto titled From Cubism to Suprematism. Malevich aimed to release the art of painting and to free it from the shackles of mimicry and representation. He rejected Renaissance ideals and bourgeois art appreciation.

The Suprematist style was cemented at an exhibition at the Dobchina Art Bureau in Petrograd. Malevich’s art works were scattered haphazardly across the walls, defying the convention of neat rows and visual order. His work, Black Square, became one of his most famous and emblematic pieces overnight. It remains as a symbol of Modernist art to this day. Suprematism was a bold form of art that relied on the use of abstract geometric shapes and bold, stark colours.

But Malevich’s artistic career hit a stumbling block. In the late 1920s, the Soviet state was heavily promoting a form of art which they called Socialist Realism. Malevich himself was not a fan. The state’s control over the production of art strengthened, eventually closing down the Petrograd State of Artistic Culture where Malevich was serving as Director. Malevich managed to be tolerated by the Communist party and did not experience any personal harassment, but his ability to exhibit and show work became limited.

In 1923, Malevich painted Black Cross, with simple echoes of the famous Black Square. On the surface it could also be seen to be free of political or social symbolism, a display of on Malevich’s beloved geometric forms. His simple black square had been purely aesthetic and content-free.

But the cross is rendered new in this work and at once familiar to the viewer. It lacks the pure neutrality of the square form. Malevich purported to want to break free from content, but the cross is eerily emblematic, meaningful and representative – reminiscent of his love for icons and peasant painting.

The cross has a long association with religion and mysticism. It is a simple form that contains strong echoes of religious doctrine and devotion. Similarly, the idea of a crossroads, or a cross street contains a reference to change, to uncertainty and to the need for decision. A cross is at once threatening, laden with associations of death and penance in the religious cannon and conversely, full of opportunity and new beginning in the public consciousness. Malevich’s cross is black, ominous and void.

Malevich died at the age of 57 in Leningrad following a struggle with cancer. His friends and students buried his ashes in a grave that was marked simply by a black square. The monument was destroyed during World War II. Mourners at his funeral waved a banner including the emblem of the black square.

Just like the black square, Malevich’s black cross (despite its religious iconography and reminders of the simple forms of folk art) empties out the tradition of painting, stripping it of its need for form, colour and representation. It is without clutter, devoid of the trappings of Renaissance art and yet reminiscent of the religious forms found within it. Within the black cross, we see Malevich coming almost full circle, returning to his youthful fascination with symbolic art, but deeply impacted by his studies and his brush with modern geometric forms.